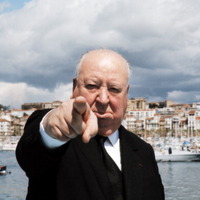 Alfred Hitchcock Net Worth and Salary: Sir Alfred Hitchcock KBE was an English director, screenwriter, and producer who had a net worth equal to $200 million at the time of his death, after adjusting for inflation (roughly $65 million in 1985 dollars). Also known as "Hitch" or "The Master of Suspense," Alfred directed more than 50 films during his 60-year career. He began his career in the film industry in 1919, working as a title-card designer for Islington Studios, and in 1922, he was hired as an assistant director on the film "Woman to Woman." Hitchcock made his directorial debut with 1925's "The Pleasure Garden" and went on to direct several films that remain popular to this day, such as "Rear Window" (1954), "Vertigo" (1958), "North by Northwest" (1959), and "The Birds" (1963). Alfred specialized in suspense and gallows humor, and he was known for using repeat actors and actresses for his films, including Cary Grant, Jimmy Stewart, Ingrid Bergman, and Grace Kelly. Hitchcock was knighted in December 1979, just four months before he passed away from kidney failure.

Psycho Salary: Alfred's largest payday came from the 1960 film "Psycho." He deferred his salary in exchange for 60% of the movie's profits, which resulted in an estimated $15 million payday, which adjusted for inflation is around $120 million today.

Early Life: Alfred Hitchcock was born Alfred Joseph Hitchcock on August 13, 1899, in Leytonstone, Essex, England. His parents, Emma and William, ran a grocer's shop, and the family lived above it. Alfred grew up in a Roman Catholic household with older brother William and older sister Ellen, and the family relocated to Limehouse when he was 6 years old. His parents leased two stores and ran a fishmongers' and a fish-and-chips shop. When Hitchcock was 11, the family moved to Stepney. He attended school at the Howrah House Convent, the Wode Street School, and St Ignatius College, then took night classes at the London County Council School of Engineering and Navigation. Alfred's father died in 1914, and Hitchcock began working at the Henley Telegraph and Cable Company to help support his mother. He continued taking night classes but switched from engineering to painting, art history, political science, and economics.

After he turned 18, Alfred received a C3 classification during World War I, but he was reportedly excused due to his weight. In 1917, he joined the Royal Engineers' cadet regiment, and after the war ended, he tried his hand at creative writing. In 1919, Hitchcock became the business manager and editor of "The Henley Telegraph," and Henley later promoted him, moving him to the advertising department, where he worked as a copywriter and designed print ads. By the end of 1919, Alfred was a title-card designer at Islington Studios, where he also worked on several silent films as a production manager, co-writer, and art director. In 1922, Hitchcock was hired as an assistant director at Michael Balcon's firm, which would come to be known as Gainsborough Pictures. While working on the film "Woman to Woman," he met Alma Reville, who he would marry in 1926; the two welcomed a daughter, Patricia, in 1928.

Career: In 1925, Balcon hired Alfred to direct "The Pleasure Garden," and Reville served as the film's assistant director and editor. He then directed the 1927 thriller "The Lodger: A Story of the London Fog," which was a hit with critics and audiences. Hitchcock's 10th film, 1929's "Blackmail," wasn't just his first "talkie" – it was England's first as well. He followed the film with "The Man Who Knew Too Much" (1934), "The 39 Steps" (1935), and "The Lady Vanishes" (1938), and in 1939, he entered into a seven-year contract with David O. Selznick and moved to Hollywood. Alfred's first Hollywood movie was 1940's "Rebecca," which earned him his first Best Director Academy Award nomination and won the Oscar for Best Picture. He later received Best Director Oscar nominations for "Lifeboat" (1944), "Spellbound" (1945), "Rear Window," and "Psycho." In the mid-1950s, Hitchcock became a U.S. citizen, made three films with Grace Kelly ("Dial M for Murder," "Rear Window," and "To Catch a Thief"), and began hosting, directing, and producing "Alfred Hitchcock Presents," which ran until 1962 and aired 268 episodes.

The 1958 thriller "Vertigo," which starred Jimmy Stewart and Kim Novak, has been named one of the best films of all-time in several polls and lists, and it earned Hitchcock and Stewart awards at the San Sebastián International Film Festival. Alfred's next three films were 1959's "North by Northwest," 1960's "Psycho," and 1963's "The Birds," which became some of his most popular films. Hitchcock's final films were 1972's "Frenzy," which he filmed in London, and 1976's "Family Plot." In addition to producing more than 20 of his films, Hitchcock wrote or co-wrote several of them, including "The Prude's Fall" (1925), "The Ring" (1927), and "The Skin Game" (1931).

Death and Legacy: On April 29, 1980, Hitchcock died of kidney failure in his home in the Bel Air neighborhood of Los Angeles. His funeral took place the following day at Good Shepherd Catholic Church in Beverly Hills, and his body was cremated after the service. In May 1980, Alfred's ashes were scattered over the Pacific Ocean.

Awards and Honors: Hitchcock received two stars on the Hollywood Walk of Fame in 1960: one for film and one for television. He was nominated for five Academy Awards and received the Irving G. Thalberg Memorial Award in 1968. In 1958, Alfred won a Golden Globe for "Alfred Hitchcock Presents," and he was presented with the Cecil B. DeMille Award in 1972. He earned eight Laurel Awards as well as lifetime achievement awards from the BAFTA Awards, the American Film Institute, and the Directors Guild of America. Several Hitchcock films have been inducted into the National Film Registry, including "Rebecca," "Rear Window," "Psycho," "The Birds," and "North by Northwest."