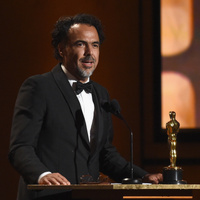 Alejandro González Iñárritu Net Worth and salary: Alejandro González Iñárritu is a Mexican film director who has a net worth of $40 million. Alejandro González Iñárritu was born in Mexico City, Mexico in 1963. He traveled across the world on a cargo ship as a teenager before returning to his hometown and enrolling at Universidad Iberoamericana, where he graduated with a communications degree. By the mid '80s, González Iñárritu was working at a local radio station; it took him four years to work his way up to station director. While working in radio, he began composing film scores for Mexican movies, and later founded Z films with his business partner Raul Olvera. That company produced scripts for short movies and ads before transitioning into television work. González Iñárritu's big break came when he penned the TV pilot episode for "Detras del dinero" in 1995. It put Z Films on the map, and four years later, he directed "Amores perros", which earned an Academy Award nomination for Best Foreign Film. After that movie, Z Films made its way to Hollywood. González Iñárritu has since worked on movies including "21 "Grams", "Babel", "Biutiful", "Birdman or (The Unexpected Virtue of Ignorance)", and The Revenant". González Iñárritu has been nominated for four Oscars, including Best Director and Best Picture for "Babel" in 2007 and Best Foreign Language Film for "Biutiful" in 2011. He has also worked on commercials, earning a Creative Arts Emmy Award for his work on Procter and Gamble's 2012 ad "Best Job". González Iñárritu is married to his wife, Maria Eladia Hagerman.