Desi Arnaz Jr Net Worth: Desi Arnaz, Jr. is an American actor and musician who has a net worth of $40 million Born Desiderio Alberto Arnaz IV in Los Angeles, California, in 1953, Desi Arnaz, Jr. is the son of legendary actors Desi Arnaz and Lucille Ball. Ball's pregnancy was featured on "I Love Lucy", and her real-life birth of Arnaz was chronicled on the show, as "Little Ricky" was born to Lucy Ricardo the same day. Twins Richard and Ronald Lee Simmons and Joseph and Michael Mayer played Arnaz as a child; later Keith Thibodeaux took over the role. As he grew up, Arnaz became more interested in show business, and started drumming in a band with several other teens. The group released two hit singles in 1965. Arnaz began his acting career with an appearance on "Here's Lucy" alongside his mother and sister. He also acted on an episode of "The Brady Bunch" and scored the part of the lead character in "Billy Two Hats". He starred in 1977's "Joyride" with Robert Carradine and Melanie Griffith. He continued to focus on his acting career during the '80s, appearing in "The Mambo Kings" as Desi Arnaz and on an episode of "Saturday Night Live". Arnaz served as the VP of the board of the Lucille Ball-Desi Arnaz Center in New York before leaving after a dispute with other members. Arnaz married actress Linda Purl in 1980, though they were divorced a year later. He has been married to Amy Laura Bargiel since 1987, and he has one child whose mother's identity he has not disclosed. 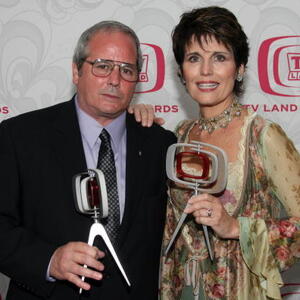