David Merlini is a Hungarian escape artist who has a net worth of $3 million. David Merlini has earned his net worth from his unique performances that he has also written, designed, directed, and performed. He was born in Budapest in October 1978; David currently lives in Monte Carlo. Merlini has performed several high-tech dangerous stunts such as being launched along with a SCUD missile, embedded in a block of solid concrete then thrown in a river, or frozen with liquid nitrogen.

At the World Magic Awards in Los Angeles Merlini received the award for Best Escape Artist. He is also the holder of several World Records for holding his breath underwater. In both 2004 and 2005 David Merlini's live TV shows broke all current ratings records. Some more of his successful and daring escapes include; being welded in a steel perforated box, after being chained and padlocked. The box was then lowered into the Danube; he freed himself within 3 minutes. Later in 2000 David was strapped in a special underwater straitjacket with his ankles secured by handcuffs, padlocks and massive lead weights. He jumps into the huge transparent tank of water along with six tiger sharks; it only took him 2:30 minutes to free himself. 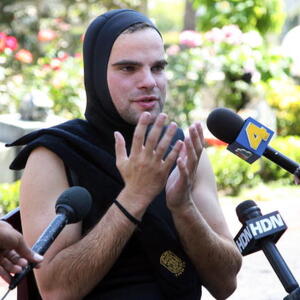