Daniel Barenboim net worth: Daniel Barenboim is an Israeli Argentine pianist and conductor who has a net worth of $60 million. Daniel Barenboim was born in Buenos Aires, Argentina in November 1942. Daniel started piano lessons when he was five and gave his first concert at seven. He took conducting classes from Igor Marketvich.

He later studied with Nadia Boulanger in Paris. Barenboim has been a music director for several major symphonic and operatic orchestras. He is currently the general music director of the Berlin State Opera, La Scala in Milan, and Staatskapelle Berlin. He has been the Music Director for the Chicago Symphony Orchestra as well as the Orchestre de Paris. He has been a critic of the Israeli occupation of Palestinian territories and has worked with a group of young Arab and Israeli musicians known as the West-Eastern Divan Orchestra. He has been awarded the Order of the British Empire, as well as prestigious awards from France, Germany, and Spain. Daniel has won even Grammy Awards. He married Elena Bashkirova in 1988 and the couple has two children. Daniel was previously married to Jacqueline du Pre until she passed away in 1987. 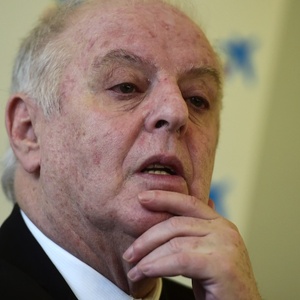