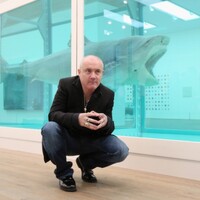 Damien Hirst Net Worth: Damien Hirst is an English artist who has a net worth of $700 million dollars. An artist known for his installation art, which often depicts images of death, Damien Hirst is one of the most commercially successful artists of all time. In 2008, he made history by side skipping the gallery system altogether and auctioning off his art work at Sotheby's, where it sold for a record $198 million dollars. Damien Hirst was born in Bristol, England, in 1965, and excelled in art from a young age. He attended Goldsmiths, University of London, where he studied fine arts and organized a student exhibition in London. Once graduated, Hirst was included in several art shows around the city. He rose to fame during the 1990s. His best-known work featured dead animals preserved in formaldehyde, with his tiger shark display gaining the most attention. Death is a predominant feature of Hirst's art. He made headlines in 2008 by selling out his art show, Beautiful Inside My Head Forever, solely by auction without using galleries. It raked in an estimated 198 million dollars, shattering records for the most earnings by one artist at an auction. He was accused of plagiarizing Marco Pierre White's "Rising Sun" with Hirst's "Butterflies on Mars" in 1999. It wasn't the first time fellow artists would allege surprising similarities between their work and Hirst's pieces, and in "The Jackdaw" in 2010, writer Charles Thomson detailed 15 allegations of plagiarism. Hirst is an active supporter of the Survival International organization and recently split from his girlfriend of two decades. He has three children.