Cindy Barshop net worth: Cindy Barshop is an American business owner and reality TV star who has a net worth of $6 million. Cindy Barshop is the owner of Completely Bare Spas. She also appeared on the television reality show, The Real Housewives of New York City. Cindy Barshop has earned her net worth through her employment at IBM in telecommunications, and as the founder of Completely Bare Spas, which specializes in lasting hair removal for both men, and women. There are at least, nine of these specialty spas around the country today. She has also developed her own line of personal hair removal care products that her clients can use at home. They also handle, tannings, skin care, teeth whitening and much more. But one of the most popular services and product they offer is Vajazzeling. Crystals, tattoos and other exquisite embellishments for a ladies private body parts, that they will apply at the shop or teach you how to do it yourself at home. Many celebrities are return clients of Cindy's and her many shops around the country.

She has also become a cast member of the reality television show, The Real Housewives of New York City. Cindy came to the show beginning with the fourth season. Unfortunately, word has it that Cindy has no plans to continue on Real Housewives of New York City. As of this year, word is that Cindy is leaving the show. She is a single mom of two 15 month old daughters, Jessie and Zoe, who are twins. Cindy tried for three years to become pregnant. According to Cindy's ex-fiance, they were together, up until five months after the birth of the twins, even though Cindy insists that she always planned to raise her children on her own. Kevin does get to spend time with the girls on a regular basis.

Cindy Barshop was born in Long Island and attended Farleigh Dickinsin University. She has a Bachelor of Science in Marketing. She has a brother, Howie, who claims that his sister, Cindy, can hold her own in any situation. We've all seen this to be true in season four of Real Housewives. She's a nice person, but she's not the type you could walk all over either. She can definitely stand her ground with the best of them. Right now, she is fighting a law suit filed by an ex-employee claiming she was fired because of her race, but according to Cindy, she was fired because of complaints made by some of her clients. 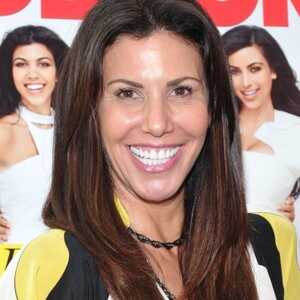