Christiane Amanpour net worth and salary: Christiane Amanpour is a British-Iranian journalist and television host who has a net worth of $18 million dollars. Amanpour is the Chief International Anchor for CNN and was the host of CNN International's nightly interview series "Amanpour", as well as the host of PBS's "Amanpour & Company". She is known for her fearless reporting style, often parachuting into conflict areas, and her emotional reports.

Early Life: Christiane Amanpour was born in West London on January 12, 1958. Her mother was Patricia Anne Hill and her father, Mohammad Taghi Amanpour, was from Tehran. Amanpour was raised in Tehran until she was 11 and then she was sent by her parents to Holy Cross Convent, a Catholic girls boarding school in England. Meanwhile, her family also returned to England following the Iran-Iraq war. They remained in London, finding it difficult to return to Iran. After Amanpour finished high school she moved to the United States to study journalism.

Amanpour graduated from the University of Rhode Island with a Bachelor of Arts in Journalism. While in college, she worked in the news departments of local radio stations, and in 1993, after graduation, she was hired by CNN to work as a desk assistant in the foreign office in Atlanta, Georgia, an entry-level position.

Career: Her first major assignment was covering the Iran-Iraq War, and she was then assigned to Eastern Europe to report on the fall of European communism. In 1989, she was assigned to work in Frankfurt, Germany, where she reported on the revolutions sweeping Eastern Europe at that time. Amanpour continued to rise through the ranks, and became a correspondent for CNN's New York office in 1990. Her reports of the Persian Gulf War brought her wide attention and she is credited with taking CNN to a new level of news coverage. Amanpour gained a reputation for being fearless during the Gulf and Bosnian wars for her  She then reported from the Bosnian war and other major conflict zones. She served as a reporter for "60 Minutes" from the late 90s into the mid-2000s, covering the Persian Gulf War, the Bosnian War, and various other conflicts around the world.

From 1992-2010, Amanpour worked as CNN's chief international correspondent as well as the anchor of her own show, "Amanpour," a daily CNN interview program that aired from 2009-2010. She reported on major crises from the world's conflict hotspots including Afghanistan, Pakistan, Rwanda, from the U.S. during Hurricane Katrina, and many others. She has also snagged interviews with major world leaders. Amanpour was the first international correspondent to interview British Prime Minister Tony Blair after the attacks of 9/11. From 1996-2005, Amanpour worked under contract with "60 Minutes" creator Don Hewitt to file five in-depth international reports as a special contributor, which earned her a Peabody Award in 1998. However, Hewitt's successor Jeff Fager was not a fan of her reporting and terminated her contract.

Amanpour announced on March 18, 2010 that she would be leaving CNN for ABC News where she would be the main anchor for "This Week." She hosted her first broadcast on August 1, 2010. During her first two months as host, "This Week"'s ratings reached their lowest point in 2003. In December 2011, ABC announced Amanpour would be leaving her post as of January 8, 2012 and returning to CNN International where she had worked for 27 years previously. However, she was kept on ABC News as a reporting global affairs anchor. In the spring of 2012, CNN International put "Amanpour"' back on the air. In September 2013, the show and its staff were moved to the CNN International office and the show went on to be produced and broadcast from London. In a memorable event, on January 7, 2015, Amanpour made headlines around the world during a "Breaking News" segment on CNN when she covered the emerging news story of the Islamic extremists who murdered 12 journalists at Charlie Hebdo.

It was announced in May 2018 that Amanpour would replace Charlie Rose permanently on PBS after he left due to allegations of sexual misconduct. Her new program "Amanpour & Company" premiered on PBS in September 2018. Since March 2020, Christiane has been doing the daily PBS program from her home in England due to the COVID-19 pandemic. Her program continues to air on PBS at many stations in various areas around the U.S.

Pop Culture Appearances: Amanpour appeared herself in the series finale of "Gilmore Girls" titled "Bon Voyage." Throughout the series, Amanpour had served as an inspiration and idol to the main character, aspiring journalist Rory Gilmore. Amanpour played herself in newscasts in the films "Iron Man 2" and "Pink Panther 2." She voiced the character of Enheduanna in "Cosmos: A Spacetime Odyssey." In 2014, she narrated "Women in War" in an episode of "Makers: Women Who Make America." In 2016, Amanpour was a castaway on the BBC radio program Desert Island Discs. For her luxury item, she chose a guitar previously owned by Bruce Springsteen.

Personal Life: Amanpour was married to James Rubin, a former US Assistant Secretary of State during the Clinton administration, from 1998-2018. They had a son, Darius John Rubin, in 2000. The family lived in New York City in 2013 to reside permanently in London. The couple announced in July 2018 that they were divorcing.

Amanpour is the niece by marriage of General Nader Jahanbani, who commanded the Imperial Iranian Air Force for 20 years before he was executed by Islamic revolutionaries in 1979. 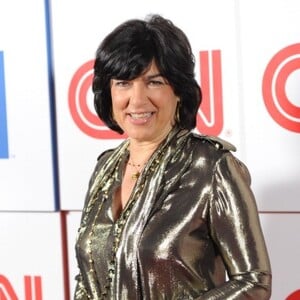