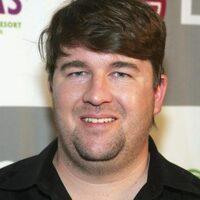 Chris Moneymaker net worth and careering winnings: Chris Moneymaker is an American professional poker player who has a net worth of $16 million. Chris Moneymaker has earned his net worth by winning many professional poker tournaments. He was the 2003 winner of the World Series of Poker (WSOP). In 2003 he was the first person to become a world qualifying online champion, after this he was referred by the nickname the "Moneymaker Effect" by the news media. He was born in Atlanta, Georgia on November 21, 1975, his family was all makers of gold and silver coins, and they chose the named Moneymaker as a modification of their German last name: "Nurmacher." He attended Farragut High School in Knoxville, Tennessee. He then earned a master's degree from the University of Tennessee in accounting He married Christina Wren in April of 2005, at a ceremony in Las Vegas, Nevada. They have one daughter and currently live in Nashville, Tennessee. His biography Moneymaker: How an Amateur Poker Player turned $40 into $2.5 Million at the World Series of Poker was published in 2005. As of April 2010, he had acquired a total lifetime tournament earnings that exceeded $3,000,000, most of the earnings a total of $2,532,041, come from the WSOP. During the 2001 Poker Stars Caribbean Adventure Main Event he ranked number 11 and earned himself $130,000.