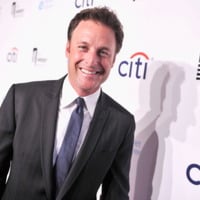 What is Chris Harrison's Net Worth and Salary?

Chris Harrison is an American television host who has a net worth of $25 million. Chris Harrison is probably best known for hosting ABC's "Bachelor" and "Bachelorette" reality series. He has hosted the show since 2002.

Chris Harrison's salary for being host of "The Bachelor" is $8 million.

Christopher Bryan Harrison was born in Dallas, Texas, on July 26, 1971. He attended Lake Highlands High School, and graduated in 1989. Afterwards, he attended Oklahoma City University on a soccer scholarship, where he was a member of the Kappa Sigma fraternity. He graduated from college with a Bachelor's degree in Mass Communications.

Beginning in 1993, Harrison worked at CBS affiliate KWTV in Oklahoma City as a sports reporter. He got the job after he was drafted through his university's athletic association, thanks to his credentials as a college athlete on the soccer team. He stayed in this role until 1999. Then, he moved to Los Angeles, California, where he briefly worked for the horse racing channel TVG Network, as well as hosted the show "Designers' Challenge" on the channel HGTV in 1999. He continued to develop his hosting career, serving as the host of the short-lived GSN game show "Mall Masters" (filmed at the Mall of America in Minnesota) in 2001.

The Bachelor and Bachelorette

In 2002, he began hosting the romance/reality series "The Bachelor" on ABC.

The "Bachelor" franchise became a huge hit, and has aired 24 different seasons as of September 2020, all with Harrison as the host. The show has become a huge cultural phenomenon, with each season trending on social media and generating large ratings. It has also spawned several successful spin-offs, including "The Bachelorette", which began airing in 2003. Other "Bachelor" spin-offs that Harrison has hosted include "Bachelor Pad" (2010-2012), "Bachelor in Paradise" (since 2014), "Bachelor in Paradise: After Paradise" (2015), "Bachelor Winter Games" (2018), and "The Bachelor Presents: Listen to Your Heart" (2020).

In addition to his "The Bachelor" hosting duties, Chris Harrison has also served as the host of the syndicated version of the game show "Who Wants to Be a Millionaire" from 2015 to 2019. Also, he became the host of TV Guide Network's entertainment news series "Hollywood 411" in 2008. He has also hosted the American Music Awards pre-show live on ABC in 2008, alongside co-hosts Carrie Ann Inaba and Nicole Scherzinger. He teamed up with "Dancing with the Stars" star Carrie Ann Inaba again in 2009 to host the TV Guide Network's live red carpet coverage of the 2009 Emmy Awards. Additionally, he has served as the host of ABC's live coverage of the Miss American Pageant for nine years.

Outside of his hosting duties, Harrison has also ventured into the world of acting. In 2002, in one of his earliest acting roles, he guest-starred on the popular show "Sabrina the Teenage Witch" in the episode "Ping, Ping a Song". He has also played a reporter in several feature films and television series, including "The Practice," "Bounce" and "Showtime" (2002), starring Robert De Niro and Eddie Murphy.

In addition to his on-screen projects, Harrison is also a published author. His debut novel, "The Perfect Letter", was published by Dey Street Books in February 2016.

Chris Harrison married his college sweetheart, Gwendolyn Jones, in 1994. They have two children, Joshua (b. 2002) and Taylor (b. 2004), together. After 18 years of marriage, they announced that they were ending their relationship in May 2012. In 2018, it was confirmed that Harrison was dating reporter and journalist Lauren Zima.

In his spare time, Harrison still plays soccer, the sport which earned him a college scholarship, and also enjoys playing golf. He is also an investor in the Steam Theory Brewing Co., a brewery out of Dallas.

In the summer of 2020 Chris and Lauren moved to Austin, Texas. In late 2020 it was rumored that Chris was building a mansion in his native Dallas, Texas.