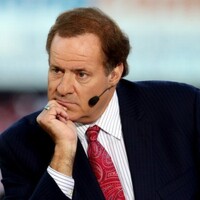 What is Chris Berman's Net Worth and Salary?

Chris Berman originally joined ESPN as an anchor in 1979 and hosted several shows during the network's first few years. Also known by his nickname, "Boomer," Chris helped ESPN carve out a strong presence in the sports entertainment world, and he continues to play an active role for the network to this day. Although Chris stepped down from many of his roles in 2017, he continues to work for the company in other capacities. Among other things, Chris Berman is famous for his memorable catchphrases and slightly eccentric mannerisms. His career has spanned more than three decades.

Christopher James Berman was born on May 10th of 1955 in Greenwich Connecticut. Chris was raised in an affluent Jewish household, and father was a corporate executive vice president. Chris' mother Peggy worked as a reporter for "Time" magazine, which may have inspired him to get into the entertainment/journalism world. Although Berman was born in Greenwich, he was raised primarily in Irvington, New York. After graduating from high school, Chris attended Brown University in 1977. During his college years, Berman had his first taste of journalism when he became sports director of the school's radio station. He eventually graduated from Brown with a degree in history.

After a stint as a weekend sports anchor at an NBC news affiliate in Hartford, Berman joined ESPN one month after it was founded. He worked with early figures like Bob Ley to lay the groundwork for ESPN's later success, and today Berman is the only remaining sports anchor from the network's earliest years. During his time at ESPN, Chris became famous for hosting various NFL shows, such as "Sunday NFL Countdown" and "Monday Night Countdown." He was also famous for covering the Super Bowl for ABC Sports.

In 2010, Chris Berman signed a new multi-year deal with ESPN that would keep him at the network for years to come. The contract stipulated that Chris Berman would continue to host not only the NFL events for which he is popular, but also additional events for golf, baseball, and other sports. As more details emerged, it was revealed that this contract would expire at the end of 2016.

In 2012, ESPN started to respond to Chris Berman's perceived drop in popularity. At the very least, he was becoming a polarizing figure. While many loved Berman's unique take on the sporting world, others seemed to think his jokes were outdated or even offensive. In particular, Chris Berman started to receive widespread criticism on social media platforms like Twitter. At this point, various fans started to voice concerns about Berman's coverage of non-NFL events. For example, for many viewers, his signature "bombastic style" simply wasn't suited to prestigious events like golf.

Appearances in Film and Television

Outside of sportscasting, Chris Berman has appeared in a number of films and television series. He played himself in two Adam Sandler films: "The Waterboy" and "The Longest Yard." In addition, he has appeared in films such as "Necessary Roughness," "The Program," "Little Big League," "Eddie," "Kingpin," and "Grown Ups 2." Berman has also appeared in commercials for Nutrisystem weight loss products.

In 1983, Chris married his wife, Katherine Alexinski. They had two children together over the course of their lifetime, and Berman and his wife raised their children in a Jewish household in Cheshire, Connecticut. In 2017, Kathy passed away after a car crash in Woodbury.

In 2018, it was revealed that Chris Berman's wife had a blood-alcohol level that was three times the legal limit at the time of her fatal crash. Research into the crash revealed that Katherine had been speeding at the time of the crash, and that she failed to apply the brakes before rear-ending another driver. The collision killed both drivers. Katherine died from blunt force trauma and drowning, as her vehicle fell into a body of water after the crash.

Further investigation determined that Katherine had traces of oxycodone and antidepressants in her system. The other driver had just visited his wife's grave when he was struck by Berman's Lexus. Because the two drivers both passed away, State police closed the investigation without filing any charges. The collision was officially ruled an accident.

In 1988 Chris paid $420,000 for an undeveloped 3-acre plot of land in Connecticut. A year later he built a multi-structure compound on the property.

In 2015, ESPN settled a sexual harassment claim involving Chris Berman. The claim was made by Sue Baumann, a makeup artist who claimed she had received inappropriate comments from Berman both inside the makeup room and through text messages. ESPN's legal team decided to settle rather than take the matter through the court system, and they claimed that the harassment claims had "no merit." Although the exact sum of the settlement was never revealed, many assumed that it was a significant figure.

In 2018, Berman was shrouded in controversy once again after a 2016 incident came to light. Chris allegedly left a "racially disparaging voicemail" for Jemele Hill, a well-known American sports journalist. Chris also allegedly threatened her. Although Hill complained to senior ESPN executives, no action was reportedly taken to address the issue. Again, ESPN's legal team announced that the claims were "without merit," and Hill herself claimed that Berman had never made any racially disparaging comments to her.

The lawsuit was actually filed by Adrienne Lawrence, a woman who had been previously fired from her position at ESPN. Over the years, a number of critics have criticized Berman for inappropriate behavior or comments to women, although nothing concrete has ever been revealed as a result of these allegations.