She is currently a judge on "Dancing with the Stars", choreographs for multiple television programs, and hosts game shows and red carpet events. Inaba was born in Honolulu, Hawaii in January 1968. She lived in Tokyo from 1986 to 1988 and was a popular Japanese singer. She hosted shows on radio and TV. When she came back to America Inaba was one of the backing dancers for In Living Color from 1990 to 1992. She was a dancer for Madonna's Girlie Show World Tour in 1993. She had roles in Austin Powers in Goldmember and Austin Powers: The Spy Who Shagged Me. She also has appeared on The View, Breaking the Magician's Code: Magic's Biggest Secrets Finally Revealed, and Hannah Montana. She has been responsible for choreographing American Idol as well as other reality shows and the Miss America Pageant for five years. Inaba is known for being a judge on the ABC show Dancing with the Stars. She has her own video production company EnterMediArts, Inc., a video production company with which she has written, directed, and produced various works for television and other media, including E! Behind The Scenes Miss America Special, the 7th Festival of the Pacific Arts, A Portrait of IVI, and Beyond the Dancing Image, as well as the short film Black Water. In 2012 she launched the Carrie Ann Animal Foundation. She is legally blind and also suffers from spinal stenosis. She was previously engaged to Jesse Sloan but they have unfortunately since called it off. 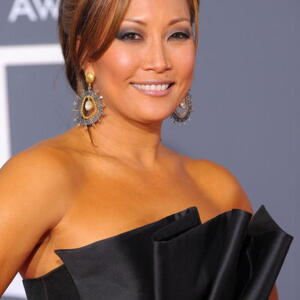