Carla Bruni net worth: Carla Bruni is an Italian-French singer, songwriter, and model who has a net worth of $15 million. Carla Bruni became famous through her modeling career, her singing and songwriting, as well as acting in a Woody Allen film.

Bruni was born Carla Gilberta Bruni Tedeschi in Turin, Italy in December 1967. Carla is married to Nicolas Sarkozy, the former French president. She is heiress to her grandfather's Italian tire company CEAT. At 19 she became a model with City Models after studying in Paris. She modeled for Guess? Jeans, and worked for Christian Dior, Yves Saint-Lauren, Chanel, Versace, and more. During the 90s she made up to $7.5 million a year and was the 20th highest paid fashion model. She dated Eric Clapton and Mick Jagger. A nude photo of her sold in 2008 for $91,000. Carla quit modeling in 1997 to focus on music. Her debut album was released in 2002. Bruni has released four studio albums including 2013's Little French Songs. Her 2007 album No Promises made it to #1 in both France and Switzerland. She met Nicolas Sarkozy in 2007 and married him in 2008. Bruni has a son with her former boyfriend. She appeared in the 2011 Woody Allen film Midnight in Paris. She has been featured on ten soundtracks. In 2006 Bruni was a flag bearer for Italy in the Olympic Winter games. The French magazine VSD named her France's most irritating celebrity in 2010. 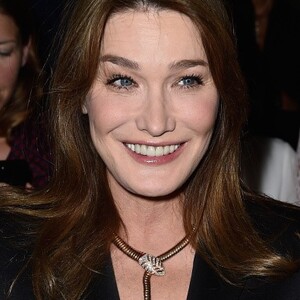