Brigitte Nielsen Net Worth: Brigitte Nielsen is a Danish actress, model and television personality who has a net worth of $600 thousand. She is probably just as well known for her marriage to actor Sylvester (Sly) Stallone as she is for her modeling and acting credits.

Early Life: Brigitte Nielsen was born Gitte Nielsen on July 15, 1963 in Rødovre, Copenhagen, Denmark. She is the daughter of Hanne, a librarian, and Svend Nielsen, an engineer.

Acting and Modeling Career: Nielsen, over six feet tall, began her modeling career working for Greg Gorman and Helmut Newton in the beginning of the 80s. She posed for Playboy several times and even posed for the cover in December 1987. In the late '80s, Marvel Comics approached her to pose for photographs dressed as the comic book character She-Hulk, and the world press nicknamed her "Amazon" due to her tall stature.

Several years later she made her acting debut in the 1985 films "Red Sonja" alongside Arnold Schwarzenegger and "Rocky IV." She later starred with then-husband Sylvester Stallone in the 1986 film "Cobra." She played Karla Fry on "Beverly Hills Cop II" (1987), co-starring Eddie Murphy, and played the Dark Witch in the Italian TV Series "Cave of the Golden Rose" between 1992–1996. She appeared in Michael Jackson's Liberian Girl and Austrian Rock Star Falco's Body Next To Body music videos. In 1997, Nielsen hosted a talk show series for a Davis TV network called "Gittes venner," and appeared in other Danish TV shows and in commercials in the late '90s. In 2003, Nielsen was in the Danish "Big Brother" alongside her former mother in law Jackie Stallone. Nielsen appeared on season one of the Italian TV show "The Mole" in 2004 and also appeared on season 3 of VH1's "The Surreal Life." In 2006, Nielsen guest-starred on "Flavor of Love." In 2007, Nielsen starred in a British mockumentary "Killing Brigitte Nielsen" which premiered on the Sky Travel network. In 2008, she appeared on the reality show "Celebrity Rehab with Dr. Drew," which depicted her and several other celebrities dealing with recovery from drug and alcohol addiction at a Pasadena rehab clinic.

In May 2008, Nielsen revealed on German television that she would be having six plastic surgeries in order to "renew" her body and that it would cost €66,000 altogether (over $77,000 USD.) She was filmed during the surgeries by German TV network RTL and had her own show called "Aus alt mach neu – Brigitte Nielsen in der Promi-Beauty-Klinik." The show was also broadcast in Italy under the name "Celebrity Makeover: Brigitte Nielsen" on Sky Italia. 2010 saw Nielsen appearing as a celebrity contestant on two French reality shows.

In 2011, Nielsen did voice work for the Danish animated comedy "Ronal the Barbarian." The next year, she appeared in the horror flick "Eldorado" and was a celebrity contestant and winner of the German version of "I'm a Celebrity…Get Me Out of Here!". In 2013, she featured in the short film "The Key." In 2014, Nielsen starred in science fiction film "Exodus," the TV series "Raising Hope," and the action film "Mercenaries." In 2015, Nielsen began hosting her own talk show "Gitte Talks" on the Danish TV channel Kana 4. Since August 2016, she has been a presenter for the German dating show "Wirt Sucht Liebe." In 2017, she joined the cast of TV series "Gods and Secrets." In 2018, Brigitte reprised her "Rocky IV" role of Ludmilla Drago in "Creed II."

Music Career: Nielsen started a music career in 1987 when she released her debut album "Every Body Tells a Story" and recorded a duet that same year with Austrian pop star "Falco," that went to No. 22 in Germany and No. 6 in Austria. Her follow up album, "I'm the One…Nobody Else" was released in 1991.  She has released some songs under the pseudonym "Gitta" because producers wanted to see if she could find success as a singer without her real, famous name on the cover. The first song she released under Gitta was "No More Turning Back," and it peaked at No. 54 on the British Single Charts.

Personal Life: Brigitte is fluent in Danish, English, German, and Italian, with some understanding of French.

Nielsen's first husband was Kasper Winding. They were married from 1983-1984 and they have one son, Julian Winding, whom Nielsen has had little contact with.

Perhaps her most publicized relationship was her marriage to Sylvester Stallone in December 1985. They were engaged during the filming of 1985's "Rocky IV." Their marriage ended in an also highly-publicized divorce in July 1987. They had no children. Her first child, Killian Marcus Gastineau was born in 1989 and was fathered by her ex-fiance Mark Gastineau. Nielsen was married to director and photographer Sebastian Copeland from 1990-1992. Nielsen had two sons with her fourth husband Raoul Meyer. In 2005, she had a highly publicized relationship with rapper Flavor Flav.

Nielsen checked herself into a rehab facility in North Hollywood in July 2007, and reports surfaced quickly that there had been a family intervention. Her manager Steven Tempone publicly confirmed that she had checked herself in. She was out a week and a half later to attend the Comedy Central roast of "Flavor Flav." In addition to appearing on "Celebrity Rehab" for alcoholism, TV Guide aired her success story with sobriety and it was confirmed in 2010 that she was sober and had quit smoking. 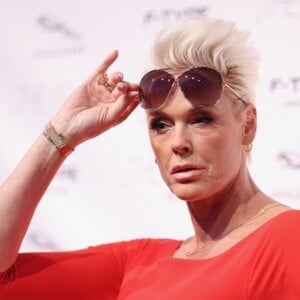