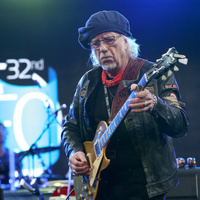 Brad Whitford Net Worth: Brad Whitford is an American musician who has a net worth of $40 million. He is best known for being the rhythm guitarist for the rock band, Aerosmith, and has also contributed to the songwriting process the band. He has been described as one of the most selfless, magnanimous, and, as a result, underrated guitar heroes in classic rock history. Some of the Aerosmith songs he is best known for include "Round and Round," "Last Child," and "Nobody's Fault." Whitford was born in 1952 in Winchester, Massachusetts, and after graduating from high school attended the Berklee College of Music. He joined Aerosmith in 1971, replacing original guitarist Ray Tabano. Aerosmith went on to be one of the most successful bands of the 1970s but after a string of less successful albums toward the end of the decade, Whitford left the Aerosmith in 1981 to work on his own project. Whitford briefly toured with The Joe Perry Project, featuring former Aerosmith band mate Joe Perry, before both Perry and Whitford rejoined Aerosmith in 1984. In the mid to late 80s, all band members completed drug rehabilitation, including Whitford, who completed programs to combat his alcohol abuse. Whitford remains sober to this day and continues to be an active force in Aerosmith. Brad Whitford is currently married to Kimberly Whitford and the couple have two children. Brad also has three children from a previous marriage to Karen Lesser.