What was Billy Graham's net worth?

Billy Graham was an American evangelical Christian pastor who had a net worth of $25 million at the time of his death in 2018. Billy Graham was a Southern Baptist who rose to celebrity status as his sermons were broadcast on radio and television stations around the country and eventually the world.

William Franklin Graham was born on a dairy farm near Charlotte, North Carolina on November 7, 1918. He was the oldest of four children. He loved to read from an early age When Graham was 14, prohibition ended and his father forced him and his sister Katherine to drink beer until they were violently ill. This created such an aversion that the children avoided alcohol and drugs for the rest of their lives. Billy attended Sharon High School and then Bob Jones college. After just one semester, Billy dropped out and transferred to what was then called the Florida Bible Institute (today's Trinity College of Florida). He preached his first sermon that year at Bostwick Baptist Church in Palatka, Florida while still a student. In 1943, he graduated from Wheaton, College, in Wheaton Illinois, with a degree in anthropology.

After college Billy served as a pastor for a number of churches around the country. He was the pastor of the First Baptist Church in Western Springs, Illinois from 1943-1944. He launched a radio program in 1945 called Songs in the Night. In 1948, at age 29, he became the president of Northwestern Bible College in Minneapolis and helped the position until he resigned in 1952. In 1949, he held his now-famous crusades, or revival meetings, in Los Angeles for which he erected circus tents in a parking lot. The crusades attracted much national media coverage and ran for eight weeks. In 1950 he founded the Billy Graham Evangelistic Association in Minneapolis, Minnesota.

Within a few years the civil rights movement began to sweep the nation. Billy, who had never really thought much about the plight of African Americans, was instantly inspired to help the cause. He began refusing to speak or appear at events that were segregated. He joined the Montgomery Bus Boycott in 1955 where he met and befriended Martin Luther King, Jr. In 1957, Billy invited Dr. King to join him during a 16 week Christian event held at New York City's Madison Square Garden. This 16 week event attracted more than 2.3 million visitors from around the country and helped propel Dr. King and the Civil Rights movement into the mainstream conscience. The two clashed over differences in opinions several times despite their close friendship, particularly over the Vietnam War. After King gave his "Beyond Vietnam" speech denouncing US intervention in Vietnam, Graham castigated him and others for speaking out against foreign policy. Despite their differences, the two remained close and in the mid '60s traveled together to the tenth Baptist World Congress of the Baptist World Alliances. Billy personally posted bail for Dr. King on several occasions after MLK had been arrested during demonstrations. Graham integrated crusades in Birmingham, Alabama in 1964 and again in 1965 in the wake of the violence that accompanied the first Selma to Montgomery march.

Graham's main tactic was to reach into the secular world as a "bridge builder." For example, he appeared as a guest on a 1969 Woody Allen TV special where he joined the comedian in a humorous exchange on theological matters. 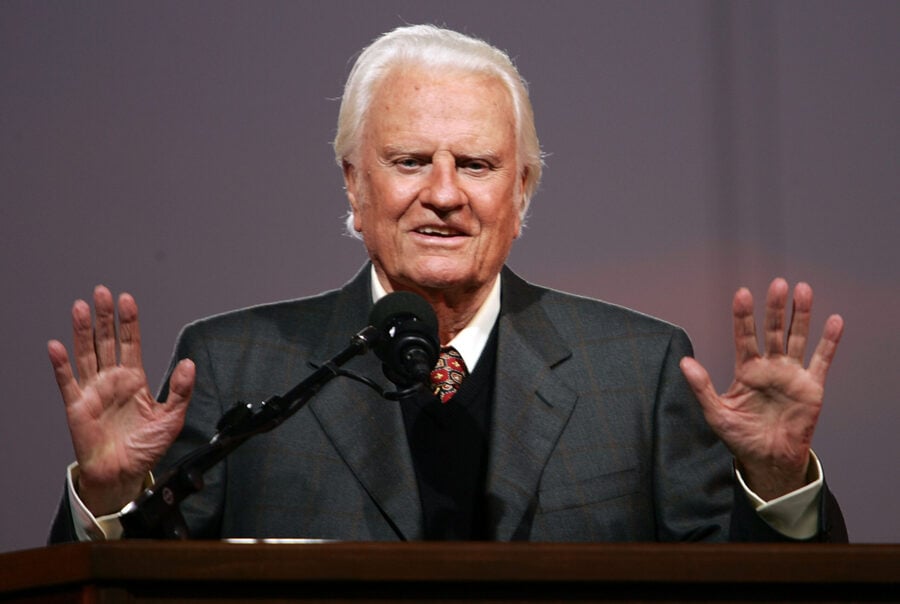 Graham was interested in fostering evangelism around the world. He traveled during the Cold War throughout Eastern Europe calling for peace. During the apartheid era, he refused to visit South Africa until its government allowed integrated seating for audiences. His first crusade there was in 1973. He also corresponded with Nelson Mandela during Mandela's 27-year imprisonment. In 1984, he led a series of summer sermons in the United Kingdom called Mission England where he used outdoor soccer fields as venues. In 1988 he appeared in China and appeared in North Korea in 1992. In 1991, Graham held his largest event in North America on the Great Lawn of Manhattan's Central Park. It was estimated that 250,000 people were in attendance. Three days after the attacks on 9/11, Graham was invited to lead a service at Washington National Cathedral. The service was attended by President George W. Bush as well as past and present leaders. In 2006, he held the "Festival of Hope" in New Orleans, which was recovering from the devastation of Hurricane Katrina. Graham prepared one final public sermon titled "My Hope America", released on DVD and played around the country and worldwide, on November 7, 2013.

Billy Graham was also the official spiritual advisor to several Presidents including Nixon and Eisenhower and had a personal relationship with most sitting presidents he saw during his lifetime. In addition, he had a close relationship with Queen Elizabeth II and was often invited by the Royal Family to special events.

Throughout his career, Billy Graham sponsored, organized, and paid for massive training conferences for Christian evangelists. It has been estimated that during his lifetime, Billy's sermons have reached an audience across television and radio of more than 2.2 billion people. His organization has produced over 30 books, a magazine and a satellite network that reaches hundreds of millions of people around the globe.

Billy and his wife Ruth were married in 1943 and they remained together until her death in 2007. They had been married for nearly 64 years. Graham was notorious for never spending time alone with any woman other than his wife-this became known as the "Billy Graham Rule." Ruth and Billy had five children together, 19 grandchildren and several great-grandchildren.

At the age of 91, in 2010, Graham began experiencing substation vision, hearing, and balance loss. Billy Graham died of natural causes on February 21, 2018 at the age of 99, at his home in Montreat, North Carolina. He became the fourth private citizen in U.S. history to lie in honor at the U.S. Capitol rotunda in Washington, D.C., and the first religious leader to have been bestowed the honor. A private funeral service was held on March 2, 2018. Graham was buried beside his wife in the prayer garden at the Billy Graham Library. His pine plywood casket, topped with a wooden cross nailed to it, had been handcrafted in 2006 by convicted murderers at the Louisiana State Penitentiary, which had been ordered after his son Franklin Graham saw the prisoners hard at work during a tour of the facility.