Beyonce and Jay-Z Net Worth

in Richest Celebrities
Beyonce and Jay-Z Net Worth:
$1.8 Billion

Jay-Z and Beyonce Net Worth and Career Earnings: Jay Z and Beyonce Knowles are an American music and business power couple who have a combined net worth of $1.8 billion. They first cracked the combined billion dollar mark in July 2014.

Jay-Z's portion of their net worth is $1 billion and Beyonce's is $500 million. That's easily enough to make them one of the top 10 richest celebrity couples in the world. As a matter of fact, when you remove famous women who happen to be dating not-so-famous billionaires like Salma Hayek and Francois-Henri Penault, Jay-Z and Beyonce are perhaps THE richest celebrity couple in the world. They are well ahead of couples like Tom Brady/Gisele Bundchen and David/Victoria Beckham. Beyonce sports a $5 million wedding ring by Lorraine Schwartz. Jay-Z has sold more than 100 million records while his wife Beyonce has sold about the same, not counting the 60 million she sold as a part of Destiny's Child. Beyonce and Jay Z were listed as the number one most powerful couple for TIME Magazine's 100 most influential people of 2006.

Dating and Marriage: The famous couple is notoriously tight-lipped about their romance. The timeline is unclear to the public, but Beyonce and Jay-Z met sometime around the year 2000. In 2002, they collaborated on a track, "03 Bonnie & Clyde" for Jay-Z's seventh album The Blueprint 2: The Gift & The Curse Beyond. Beyonce appeared as his girlfriend in the music video, which confirmed public speculation that they were dating. Jay Z and Beyonce also collaborated on Beyonce's hit singles Crazy in Love and That's How You Like It. They were married quietly on April 4, 2008. There was no press and the wedding was very low-key. Beyonce debuted her $5 million Lorraine-Schwartz wedding ring to the public in September 2008, officially confirming their wedded bliss. Despite keeping their relationship mostly under wraps, they have acknowledged difficulty in their marriage due to an affair Jay Z publicly admitted to in 2016 following the release of Beyonce's "Lemonade."

Family: Beyonce has discussed suffering a miscarriage in 2010, and has described it as the "saddest thing" she has ever gone through. In April 2011, Beyonce and Jay-Z traveled to Paris where she became unexpectedly pregnant. She revealed her pregnancy at the VMA awards that August during a performance. That performance made the VMA's the most-watched broadcast in MTV history with 12.4 million viewers. Beyonce gave birth to their daughter Blue Ivy Carter in New York City on January 7, 2012. Jay-Z recorded and released a song, Glory, dedicated to their child. In February  2012, Beyonce announced on Instagram that she was expecting twins. Her announcement "broke the internet", gaining 6.3 million likes in eight hours. Their twins, Rumi and Sir Carter, were born on June 13, 2017 at the UCLA Medical Center in California.

Combined Earnings: Jay and Bey are easily one of the highest earning couples in the world every year. In an average year, they earn a combined $100 million from record sales, touring, merchandise, endorsements, business ventures and more. When Jay performs, his concerts gross an estimated $1.5 million per night. When Beyonce tours, her concerts gross over $2 million. We have tracked their annual combined earnings since 2007.

Keep in mind that number is just their actual earnings before taxes. That number does not include the paper value of investments in businesses and real estate (or debt connected to those real estate assets). Jay's stake in Tidal could be worth hundreds of millions of dollars on paper to the right buyer. Beyonce's clothing line could also be worth hundreds of millions.

Beyonce and Jay-Z Net Worth Via Getty Images

Beyonce and Jay-Z Net Worth from Real Estate: Beyonce and Jay-Z own an extremely valuable portfolio of real estate assets around the world. When they are in the United States, The Carters can be found at a luxury apartment in New York City, a mansion in Westchester County, New York or a waterfront Villa in Miami. Here's a highlight reel of the homes we KNOW about:

Combined Earnings: Jay and Bey are easily one of the highest-earning couples in the world every year. In an average year, they earn a combined $100 million from record sales, touring, merchandise, endorsements, business ventures and more. When Jay performs, his concerts gross an estimated $1.5 million per night. When Beyonce tours, her concerts gross over $2 million. We have tracked their annual combined earnings since 2007.

Charity: Beyonce and Jay-Z have been actively philanthropic throughout their careers both individually and as a couple. In 2003, Jay-Z founded the Shawn Carter Foundation, which helps students through college who face socio-economic hardships. Jay-Z has used his platform to raise awareness for the global water shortage. MTV and the UN produced a documentary, Diary of Jay-Z, Water For Life in November 2006. Jay-Z and Beyonce pledged $1 million dollars to the American Red Cross in the aftermath of Hurricane Katrina. Also after Hurricane Katrina, Beyonce and Kelly Rowland founded the Survivor Foundation to provide transitional housing for victims around the Houston area. The foundation has expanded to work with other charities around the city, and it also provided relief from Hurricane Ike a few years later. Jay-Z anonymously established a trust fund for shooting victim Sean Bell's children in 2006. In April 2011, Beyonce teamed up with First Lady Michelle Obama to help bolster the campaign against child obesity. Beyonce released a cover of God Bless the USA as a charity single to raise funds for the New York Police and Fire Widows' and Children's Benefit Fund. In December 2012, following the Sandy Hook Elementary School shooting, Jay Z, Beyonce, and several other celebrities produced a bipartisan video campaign, Demand a Plan, to urge the government to introduce stricter gun laws. Beyonce was named The Most Charitable Celebrity of the Year in December 2016. 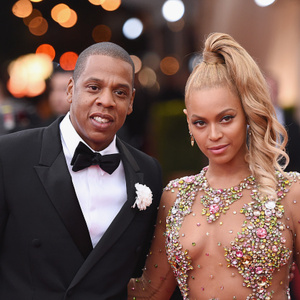