What is Banksy's Net Worth?

Banksy is a famed graffiti artist and documentary filmmaker who has a net worth of $50 million. Although little is known about his true identity, he is one of the most celebrated and well-known artists today. He is most famous for his street art, which seems to pop up in the most unexpected locations. Using a unique stenciling technique, Banksy leaves behind images that provide poignant messages. Some are political in nature, some are examples of social commentary, while others simply exhibit dark humor. His work has appeared around the world.

Banksy had his start in Bristol's underground scene, eventually gaining more prominence over the years and expanding his reach to an international scale. Although he once sold photographs and reproductions of his graffiti, he eventually ceased this practice. This didn't stop people from selling his street art, however. His graffiti is often physically removed from streets by carefully taking away the wall itself. Banksy is also known for the documentary "Exit Through the Gift Shop," which debuted in 2010 at the Sundance Film Festival. This movie was later nominated for an Academy Award for Best Documentary Feature.

Banksy's identity has never been confirmed, although a number of sources have their own theories. In 2003, a writer for "The Guardian" described him as a 28-year-old white male with a silver tooth and a silver earring. It is generally understood that Banksy began his artistic pursuits after he was expelled from school at the age of 14. He is also believed to have served time in jail for petty crime. Banksy's penchant for anonymity is generally due to the illegality of graffiti. Initially, he grew up in Bristol before moving to London sometime around 2000.

The most widely accepted theory is that Banksy is a man named Robin Cunningham. Robin was identified as Banksy in 2008, and he was born on July 28th of 1973 in Yates, England. A number of Robin's former classmates have backed up these claims, and after geographic profiling, it was discovered that Banksy's known works seem to match the movements of Cunningham. The well-known Drum and Bass DJ Goldie has referred to Banksy as "Rob" on at least one occasion.

With all that being said, there are a number of additional theories as to Banksy's true identity. Some believe that he is Robert Del Naja, a member of the trip-hop band Massive Attack. Prior to forming the band, Del Naja has been a graffiti artist, and many described him as a "close friend" of Banksy. Some believe that he is the comic book artist Jamie Hewlett, best known for the "Tank Girl" comics. In 2020, people on Twitter began to theorize that Banksy was actually "Art Attack" presenter Neil Buchanan.

Regardless of his true identity, Banksy began his graffiti career in the early 90s, initially employing a freehand technique and collaborating with figures like Nick Walker, Inkie, and 3D. By 2000, however, he had switched over to stenciling. This technique required much less time to "tag" a wall, and it lowered the chances of being caught by the police. After making this switch, he became much more renowned across Bristol and London. His first known wall mural was "The Mild Mild West," which depicted a teddy bear throwing a Molotov cocktail at three police officers. 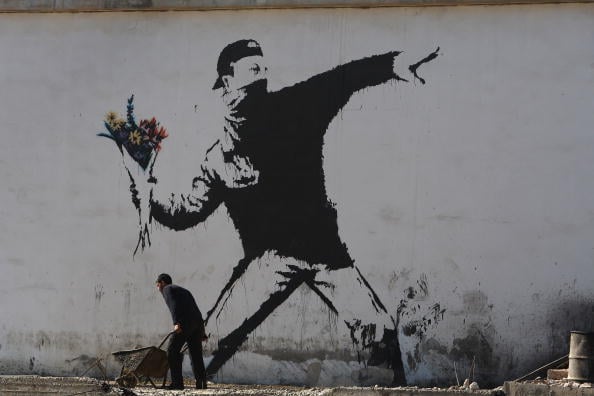 By the early 2000s, Banksy's art began to be featured in exhibitions. The first was a small venue in Los Angeles, followed by an exhibition called "Turf War" in a London Warehouse. During this period, he became known for subverting well-known paintings. An example was a rendition of Monet's "Water Lily Pond," which included litter and a floating shopping cart. In 2004, he produced a considerable quantity of fake 10-pound notes that featured Princess Diana's head instead of the Queen's.

Another major accomplishment for Banksy was tagging the Israeli West Bank wall. This is one of the most dangerous and heavily-guarded places in the world. By this point, many high-profile celebrities and wealthy individuals were eager to get in on the action. Christina Aguilera purchased an original and two prints for 25,000 pounds. Further pieces sold for around 50,000 pounds soon after. The so-called "Banksy Effect" was in full force, and many other works were later sold for sums exceeding 100,000 pounds. In 2007, a new record was set when one of his pieces sold for 288,000 pounds. In 2008, Banksy's art appeared in Louisiana following Hurricane Katrina.

In 2009, Banksy feuded with well-known London graffiti artist King Robbo. Robbo had painted the oldest piece of graffiti in London – a wall mural near the British Transport Police Headquarters. Banksy destroyed most of this mural in 2009, causing Robbo to go back and fix it. This went back and forth until Robbo started to deface many other examples of Banksy's artwork elsewhere. The feud became the subject of a television documentary called "Graffiti Wars."

In 2010, Banksy became the subject of another documentary called "Exit Through the Gift Shop," which received strong reviews. Banksy continued to sell his art for hundreds of thousands of pounds. In 2013, he created a pop-up boutique of original, signed canvases for $60 each. An old man was left to man the pop-up, and it took hours for people to fully realize that the artwork was authentic. In 2015, Banksy opened "Dismaland," a parody of Disneyland. In 2018, one of his pieces sold for over one million pounds. 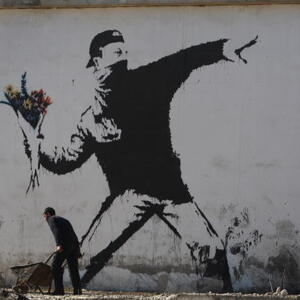