What is Tom Brokaw's net worth and salary?

Tom Brokaw is an American television journalist and author who has a net worth of $85 million. Tom Brokaw is probably most famous for serving as the lead anchor and managing editor of "NBC Nightly News" from 1982 to 2004.

In 1997 Tom signed a five-year $7 million contract with NBC. That's the same as earning around $11.4 million in today's dollars. He then signed an a three-year extension to keep him at the helm of NBC Nightly News through 2004. When that contract ended he signed a new 10-year extension that kept Brokaw at the network to produce documentaries and other series. He has since signed additional extensions. The terms of those extensions are not known, but the annual salary amounts are believed to be in the $5 million range.

Thomas John Brokaw was born on February 6, 1940 in Webster, South Dakota, the eldest of three sons to Jean and Anthony Brokaw. He attended Yankton Senior High School where he was governor of South Dakota American Legion Boys State, before moving on to The University of Iowa. His time in Iowa was less than productive so Tom soon transferred to the University of South Dakota where he graduated in 1964 with a Bachelor of Arts in Political Science.

His first job after college was at a television station called KITV in Sioux City, Iowa. From there, Tom worked at stations in Nebraska and Georgia before joining NBC News in 1966. His first job for NBC was as the anchor for the 11pm News at KNBC in Los Angeles. He got a huge break when NBC bumped him to White House correspondent just before the Watergate scandal broke. He was the anchor of the Saturday editions of "Nightly News" at this time as well. Brokaw kept a closely guarded secret for many years and only several years later disclosed that he had been offered, and promptly turned down, the press secretary position in the Nixon White House in 1969. 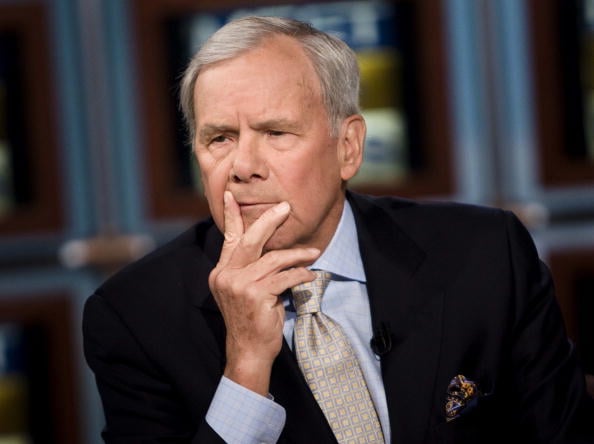 On April 5, 1982, Brokaw began appearing on "NBC Nightly News" from New York. Originally a co-anchor with Roger Mudd, the NBC News president Reuven Frank concluded after one year that the dual anchor program was not working and selected Brokaw as the sole anchor. "The NBC Nightly News with Tom Brokaw" began in September 1983. Throughout his time on the show, he reported on the Challenger Disaster, Hurricane Andrew, the Loma Prieta earthquake, and numerous others. In 1989, Brokaw was the first English-language broadcast journalist to report the Fall of the Berlin Wall. He attended a televised press conference in East Berlin organized by Gunter Schabowski, whom Brokaw had an interview with after the press conference. Later that night, Brokaw reported from the west side of Brandenburg Gate as pandemonium broke out. Among other infamous Brokaw reports, conducted the first one-on-one American television interview with Soviet leader Mikhail Gorbachev and Russian President Vladamir Putin.

On September 11, 2001, Brokaw, Katie Couric, and Matt Lauer joined forces around 9:30 a.m. following the live attack on the South Tower of the World Trade Center and continued to anchor all day, well after midnight. After the collapse of the second tower, Brokaw made this powerful statement: "This is war. This is a declaration and an execution of an attack on the United States." He continued to anchor coverage until past midnight the following two days. Later that month, a letter containing anthrax was addressed to him as part of the 2001 anthrax attacks. He was unharmed, but two NBC News employees were infected.

In 2002, NBC announced Brokaw's retirement as anchor of "NBC Nightly News", following the 2004 presidential election, to be succeeded by Brian Williams. Brokaw was set to remain with "NBC News" in a part-time capacity from that point onwards, serving as an analyst, anchoring, and producing documentary programs. Brokaw closed his final "Nightly News" broadcast in front of 15.7 million viewers on December 1, 2004. His opening statement of his final address was: "Well the time is here. We've been through a lot together through dark days and nights and seasons of hope and joy. Whatever the story, I had only one objective, to get it right." He was regarded as the most popular news personality in the United States by the end of his run as "Nightly News" anchor.

After leaving his position as an anchor, Brokaw remained with NBC as a Special Correspondent. He served as an NBC analyst during the 2008 presidential election campaign and moderated the second presidential debate between Barack Obama and John McCain. Since 2008, he has served occasionally as a moderator for "Meet the Press." In 2011, he began hosting a baseball documentary series for Fox Sports Net called "The Boys in the Hall." In 2014, a new broadcast facility opened on the University Studios Hollywood lot named in Brokaw's honor, the Brokaw News Center. Later that year, President Barack Obama presented Brokaw with the Presidential Medal of Freedom. In 2016, Brokaw gave a eulogy for former First Lady Nancy Reagan at her funeral.

Tom has also written ten books. The most famous of which is probably 1998's "The Greatest Generation" which earned him numerous awards and honors and is a perennial best seller. In 2019, Brokaw wrote about his experiences working as a reporter and as a member of the White House press corps in "The Fall of Richard Nixon: A Reporter Remembers Watergate."

Brokaw also serves on the board of directors of the Council on Foreign Relations, the Committee to Protect Journalists, the International Rescue Committee, and the Mayo Clinic. Tom is also a member of the Howard University School of Communications Board of Visitors and a trustee of the University of South Dakota, the Norton Simon Museum, the American Museum of Natural History, and the International Rescue Committee.

Brokaw has been married to author Meredith Lynn Auld since 1962. They have three daughters. Brokaw and his wife bought a ranch in Livingston Montana in 1989, where they spend most of their time. Brokaw was diagnosed with multiple myeloma, a blood cancer, in 2013. In December 2014, he announced that his cancer was in full remission.

In 1998 Tom and his wife Meredith paid $4.25 million for a 56-acre estate in Westchester County, New York. They listed the estate for sale in June 2018 for $6.3 million. They ultimately sold the property at a loss in August 2019 when a buyer paid $4.25 million. It's unclear if Tom sold the full 56-acres or roughly 46-acres. At one point the property was removed from the market and re-listed as two parcels, one of 10-acres and another of 46-acres.

During the peak of his time at NBC, Tom would spend weekends at the Westchester estate and weekdays at a Park Avenue duplex. The Brokaws sold this duplex in 2011 for $10 million. They still own a different New York City apartment on Park Avenue.

For roughly three decades Tom and Meredith lived half the year on a 4,128-acre ranch in Park County, Montana. They listed this ranch in June 2017 for $17.9 million. They sold the ranch in 2019 for an undisclosed price.