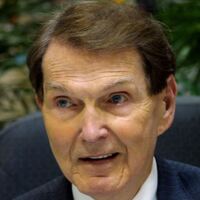 Tim LaHaye net worth: Tim LaHaye was an American minister, speaker, and author who had a net worth of $20 million. Tim LaHaye was born in Detroit, Michigan in April 1926 and passed away in July 2016. He authored more than 85 books and is best known for co-authoring the Left Behind series. LaHaye graduated from Bob Jones University, Western Seminary, and Liberty University and served in the United States Army. He was called one of the 25 most influential evangelicals in America by Time Magazine. His Left Behind series includes Left Behind: A Novel of the Earth's Last Days, Tribulation Force: The Continuing Drama of Those Left Behind, Nicolae: The Rise of Antichrist, Soul Harvest: The World Takes Sides, Apollyon: The Destroyer Is Unleashed, Assassins: Assignment: Jerusalem, Target: Antichrist, and many more. He also authored the Babylon Rising series and nonfiction works including The Act of Marriage: The Beauty of Sexual Love and Mind Siege: The Battle for Truth. Tim LaHaye passed away on July 25, 2016 at 90 years old.