Terri Irwin net worth and salary: Terri Irwin is an American-Australian naturalist and author who has a net worth of $10 million. Terri Irwin was born in Eugene, Oregon in July 1964. She is perhaps best-known for being the widow of Steve Irwin and the mother of Bindi Irwin and Robert Irwin.

Terri Irwin is also the owner of Australia Zoo which is located in Beerwah, Queensland, Australia. She co-stared with Steve Irwin on the television series The Crocodile Hunter as well as the TV series Croc Files and The Crocodile Hunter Diaries. Irwin began working as a veterinary technician in 1989. She went on a tour of Australia in 1991 where she met Steve Irwin and the couple was married in June 1992. They were together until his death in 2006. Also in 2006 Terri was made an honorary Member of the Order of Australia for services to wildlife conservation and the tourism industry. 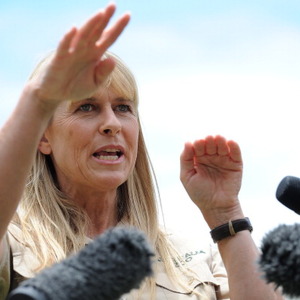