What is Teresa Giudice's Net Worth?

Teresa Giudice is a reality television star and author who has a net worth of $500 thousand. Giudice rose to fame as a cast member on the Bravo reality show "The Real Housewives of New Jersey" (2009–present). Teresa and her husband Joe Giudice have both served time in jail. She served 11 months in prison for fraud in 2015. In 2011 they filed for bankruptcy, listing $11 million worth of debt.

Outside of "The Real Housewives", Teresa has appeared on shows like "Live With Regis and Kelly," "Rachael Ray," "The Wendy Williams Show," and "Good Morning America." Teresa competed on "Who Wants to Be a Millionaire" (2010) and "Celebrity Apprentice" (2012). She had an uncredited role in the film "Donnie Brasco" and guest-starred on a 2009 episode of the NBC medical drama "Mercy." Giudice has graced the covers of several magazines, including "People," "Life & Style," and "Us Weekly," and she has blogged for People.com and Bravotv.com. A "New York Times" best-selling author, Teresa has published seven books: "Skinny Italian: Eat It and Enjoy It — Live La Bella Vita and Look Great, Too!" (2010), "Fabulicious!: Teresa's Italian Family Cookbook" (2011), "Fabulicious!: Fast & Fit: Teresa's Low-Fat, Super-Easy Italian Recipes" (2012), "Fabulicious!: On the Grill: Teresa's Smoking Hot Backyard Recipes " (2013), "Turning the Tables: From Housewife to Inmate and Back Again" (2016), and "Standing Strong" (2017).

Teresa Giudice was born Teresa Gorga on May 18, 1972, in Paterson, New Jersey. Her parents, Giacinto and Antonia, immigrated to America from Sala Consilina, Italy. Teresa has a brother, Giuseppe (also known as Joe), and her sister-in-law, Melissa, has been one of her "Real Housewives" castmates since the show's third season. Giudice grew up in a Roman Catholic household and earned a degree in Fashion Marketing and Management from Berkeley College. After college, Teresa worked as an associate buyer at Macy's.

In 2009, Teresa and her then-husband, Joe, joined the cast of the Bravo reality series "The Real Housewives of New Jersey." Giudice is the only one of the Housewives to appear in every season of the show, and in October 2015, she starred in a three-episode spin-off called "Teresa Checks In," which focused on the Giudice family after Teresa was sentenced to prison. She was reportedly paid $62,000 per episode during the show's tenth season. Giudice created her own line of wines (Fabellini Wines) and haircare (Milania Hair Care), and her fashion line, TG Fabulicious, features clothing and accessories with phrases like "Happy wife, happy life" and "Love, love, love." In 2012, she came in fifth place on "Celebrity Apprentice," raising $70,000 for The NephCure Foundation, and she has served on the committee for the children's charity Project Ladybug, which was founded by her "Real Housewives" co-star Dina Manzo. In May 2017, Teresa opened a restaurant in East Hanover, New Jersey, with her brother and sister-in-law; Gorga's Homemade Pasta & Pizza closed in January 2018. Giudice began practicing yoga during her time in prison, and after her release, she became a certified yoga teacher. 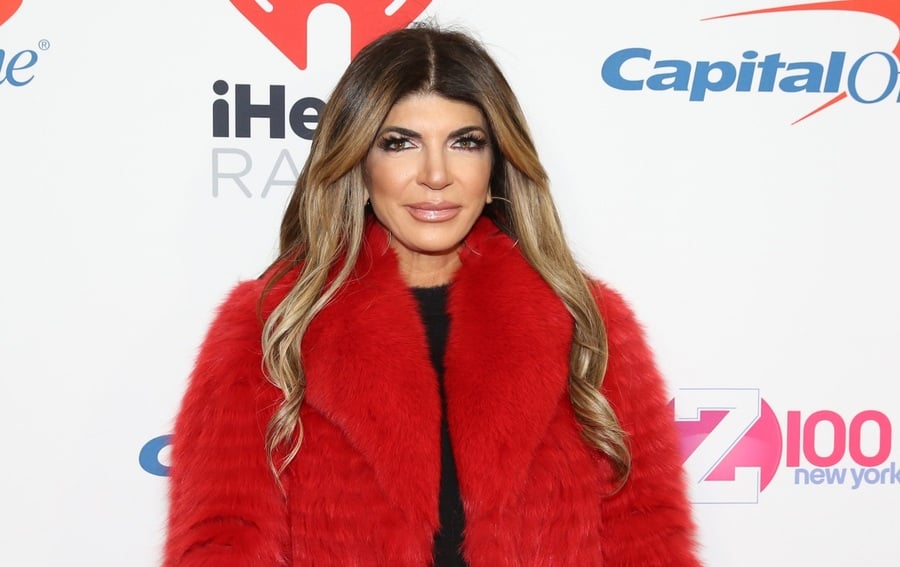 In 2009, Joe and Teresa filed for bankruptcy. In their filing, they claimed to be more than $11 million in debt, and they were forced to auction off many of their household items and put their mansion up for sale.

In July 2013, both Joe and Teresa were indicted with 39 counts of conspiracy to commit mail fraud, bank fraud, wire fraud, bankruptcy fraud, and making false statements on loan applications, and they pleaded not guilty the following month.

In March 2014, the Giudices pleaded guilty to 41 counts of fraud after making a deal with federal prosecutors. Teresa received a sentence of 15 months in prison, and Joe's sentence was 41 months and potential deportation (though Joe's family moved from Italy to the U.S. when he was just a year old, he never officially became an American citizen); they were also ordered to pay $414,000 in restitution which they ultimately did pay down.

Teresa served her sentence at the Federal Correctional Institution in Danbury, Connecticut, from January 5, 2015, to December 23, 2015, then served the remaining four months of her sentence under house arrest. Joe served his time from March 23, 2016, to March 14, 2019, then was kept at an immigration detention center until October 2019 when he moved to Italy so he would be able to work while he awaits the court's decision on deportation. In late 2014, Teresa sued her bankruptcy lawyer for $5 million, alleging that he didn't meet with her before he filed bankruptcy documents, and in June 2018, her 2009 bankruptcy case was dismissed, and she was ordered to pay restitution to the IRS and New Jersey's department of treasury.

Teresa married Giuseppe "Joe" Giudice on October 23, 1999, and they welcomed their first daughter, Gia, on January 8, 2001. After Gia, they had three more daughters: Gabriella (born October 4, 2004), Milania (born February 2, 2006), and Audriana (born September 14, 2009). Teresa and Joe divorced in September 2020, and two months later, she revealed that she was in a relationship with businessman Luis Ruelas. After Giudice was released from prison, she took up competitive bodybuilding, and in June 2018, she competed in the NPC South Jersey Championships, placing third in the Bikini: 40+ category.

In 2008, Teresa and Joe built a nearly 10,000 square foot mansion in Montville, New Jersey. The estate features six bedrooms, five bathrooms, a Cinderella staircase, a gigantic chandelier, and a swimming pool. In 2014, at the height of her legal troubles, Teresa listed this home for sale for $4 million. In September 2020 she put it back on the market for $2.5 million. She lowered the asking price to $2.25 million in January 2021. A year later she lowered the price to $1.999 million. Joe is still technically a partial owner of this mansion:

In March 2021 Teresa and her new fiance Luis paid $3.35 million for a new mansion in Montville. Technically/legally/financially, Luis was was the acquirer.