Ted Haggard net worth: Ted Haggard is an American evangelical pastor who has a net worth of $200 thousand dollars. Ted Haggard was born in Yorktown, Indiana, and became a Born-Again Christian when he was in his late teens. He went on to graduate from Oral Roberts University in 1978. In the early 80s, he founded New Life Church, after his mentor, missionary Danny Ost, said that he had a vision of Haggard starting a church in Colorado Springs.

Over the course of the next 22 years, the church grew from a handful of people meeting in his basement to 14,000 people gathering on a campus in the north part of Colorado Springs. In 2006, a masseur and escort came forward with allegations that Haggard had hired him for sex on multiple occasions and had purchased crystal meth from him. Haggard initially denied the allegations, but later admitted to many of them. He was removed from his position with New Life Church and went into a rehab facility. He and his family appeared on various talk shows and a documentary was made about his life. He eventually returned to preaching, but a few years later, a member of his former congregation stepped forward revealing that New Life had paid him to remain silent about Haggard's sexual interactions with him. Most recently, he appeared on the reality television show, "Celebrity Wife Swap". 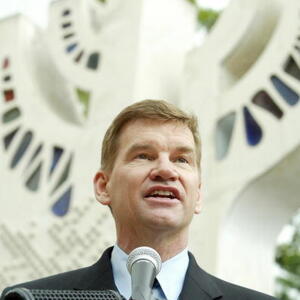