What was Sun Myung Moon's Net Worth?

Sun Myung Moon was a Korean religious leader, businessman, and media mogul who had a net worth of $900 million at the time of his death. Sun Myung Moon was best known for founding the Unification movement and authoring its conservative theology of the "Divine Principle." In 1982, a decade after having moved to the United States, he was found guilty of deliberately filing false federal income tax returns and was sentenced to 18 months in prison. Moon founded News World Communications which is an international news media company that founded The Washington Times. He also founded Tongil Group which is involved in manufacturing, tourism, publishing and pharmaceuticals. Moon was a leading figure in the new wave religious movements of the 1960s and 1970s. His followers were called Moonies and they considered Moon their "True Father". Some considered him a cult leader. Sun Myung Moon passed away on Step ember 3, 2012 at 92 years old.

Sun Myung Moon was born on January 6, 1920 in Chongju, North Pyongan Province in what was then Japanese Korea. He was the younger of two sons in a farming family that comprised eight children in total. Initially followers of Confucianism, the family converted to Christianity when Moon was ten, and subsequently joined the Presbyterian Church. As a young adult, Moon studied electrical engineering at Waseda University in Tokyo, Japan. In 1947, he was convicted by the government of North Korea of spying on behalf of South Korea; as a result, he was sentenced to five years in the Hungnam labor camp. When United Nations troops raided the camp during the Korean War in 1950, Moon managed to escape and flee to Busan, South Korea. 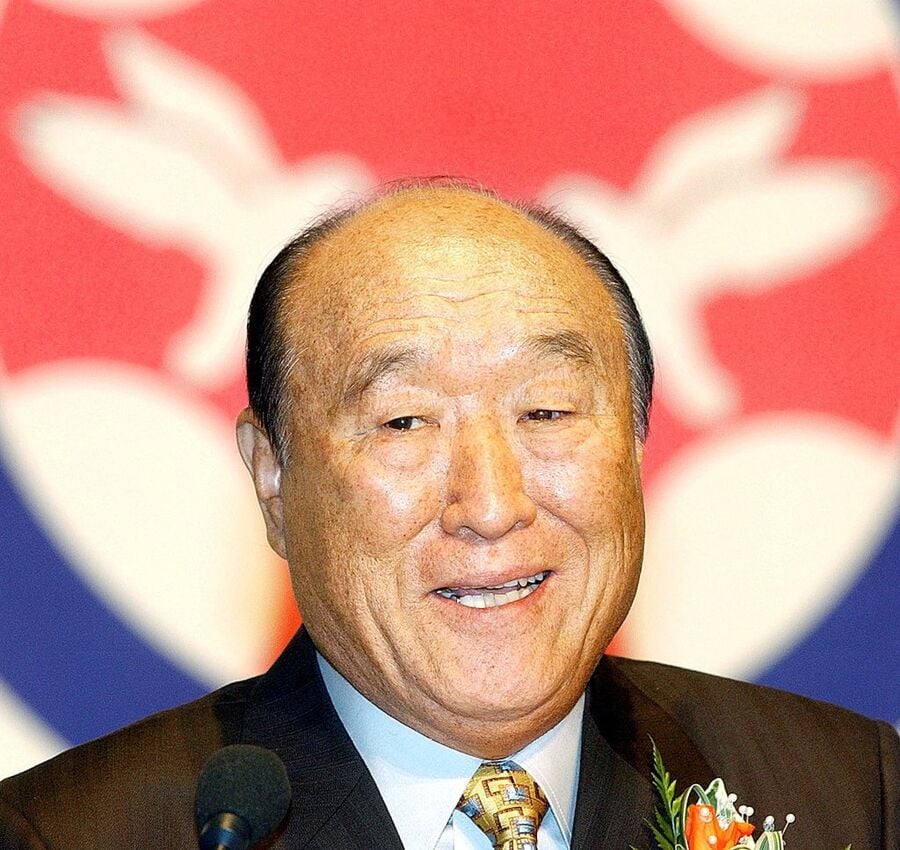 Following his escape from Hungnam, Moon became a vehement anti-communist. Believing that the Cold War was the final battle between God (democracy) and Satan (communism), he founded the Holy Spirit Association for the Unification of World Christianity in Seoul in 1954. At his church, Moon spread conservative messages that emphasized Christian, family-based value systems. He went on to co-author with Hyo Won Eu the theological textbook for the movement, translated in English as "The Divine Principle of Exposition of the Divine Principle."

Among its many notable aspects, the Unification Church is particularly infamous for its "blessing ceremonies," mass wedding events during which thousands of couples are "married" all at once. Emphasizing conservative Christian morality, these ceremonies are intended to bring the participating couples into God's lineage while reasserting the central importance of the family as the key to peace on Earth.

Trouble in the United States

In 1971, Moon relocated to the United States. The following year, he founded the International Conference on the Unity of the Sciences. In 1974, he drew significant backlash when he asked American members of the Unification Church to support Richard Nixon during the Watergate scandal by fasting and praying for the embattled president in front of the United States Capitol. Greater trouble came to Moon in 1982, when he was convicted of intentionally filing false federal income tax returns. Consequently, he was fined $15,000 and sentenced to 18 months in prison, 13 of which he ultimately served.

Other Political and Business Endeavors

Through the Unification Church, Moon was heavily involved in both business and politics. Among his endeavors, he founded the Korean Culture and Freedom Foundation; the Professors World Peace Academy; the Little Angels Children's Folk Ballet of Korea; and the Universal Ballet. Moon also founded the South Korean organization Tongil Group, which facilitates business in the tourism, pharmaceuticals, and publishing sectors; and News World Communications, an international news media corporation that used to own the Washington Times.

In 1989, Moon founded Seongnam Ilhwa Chunma, the most successful of all Korean football clubs. He also owns a number of resorts, including the Ocean Resort, Pineridge Resort, and Yeongpyeong Resort.

Anyone who enjoys sushi owes Sun Myung Moon a debt of gratitude. Through the company he founded, True World Foods, Moon almost single-handedly invented the concept of sushi as we know it today.

True World Foods delivers fresh fish to restaurants and retail outlets across the world. In order to increase the popularity and consumption of fish, the company's leaders slowly sold Americans and then the world on a new food concept called sushi. Today True World delivers over one million kilos of fresh fish to the US every year, much of which is then used to make sushi. Annual revenue is north of $500 million. 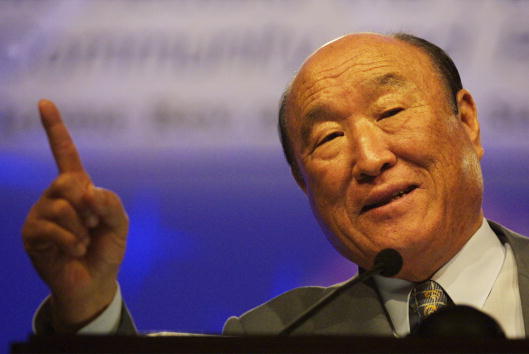 For a myriad of reasons, Moon was highly controversial during his lifetime. He drew particular derision for his claim of being the Messiah and the Second Coming of Christ. Moon also provoked backlash for his relationships with various unsavory political figures, such as Richard Nixon, George W. Bush, Mikhail Gorbachev, and Kim Il-sung. Additionally, he was criticized for his brazen homophobia; his inflammatory rhetoric and anti-communist activism; his violation of the separation of church and state; and his reported neglect of his wife and his corporate exploitation of his children and children-in-law, among other things.

Moon wed his first wife, Choi Sun-kil, in 1945. The couple had a son named Sung Jin, and eventually divorced in 1957. Three years after that, Moon married the 17-year-old Hak Ja Han; together, they were dubbed the "True Parents" by members of the Unification Church.

In August of 2012, Moon was admitted to a hospital in Seoul after having suffered from pneumonia. He was soon put on a ventilator in the intensive care unit. Two weeks later, after suffering multiple organ failures, Moon was transferred to a church-owned hospital near his home. He ultimately passed away in early September at the age of 92.