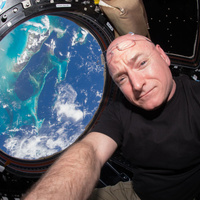 Scott Kelly net worth: Scott Kelly is an American astronaut, engineer, and retired United States Navy Captain who has a net worth of $500 thousand dollars. Scott Kelly was born in Orange, New Jersey in February 1964. Kelly will be in a special yearlong mission starting in 2015 to the international Space Station. He served as commander for the International Space Station Expedition 26 and his brother Mark Kelly is also a former astronaut. Scott and Mark Kelly are the only pair of siblings who have both traveled in space. He first flew as a pilot in 1999 on Space Shuttle Discovery. He then was mission commander of the STS-118 mission to the International Space Station in 2007. In 2010 he served as a long term crewmember of the ISS. Kelly is the current operations branch chief for the International Space Station. He attained the rank of Captain in the United States Navy and retired from active duty in 2012 after 25 years of service. Kelly has received many awards and is a member of the Association of Space Explorers and an Associate Fellow of the Society of Experimental Test Pilots.