She earned her master's degree in sociology from The New School and her Ed.D. from Teachers College, Columbia University. Westheimer started off on NBC Radio's WYNY-FM in 1980 hosting the radio show Sexually Speaking. She has authored several books including Sex For Dummies, The Art of Making Dances, Sexually Speaking: What Every Woman Needs to Know about Sexual Health, Who Am I? Where Did I Come From?, and Dr. Ruth's Guide for Married Lovers. In 1983 her radio show was getting a quarter of a million listeners and in 1984 the show was nationally syndicated. She started writing a column in Playgirl magazine and hosted The Dr. Ruth Show on Lifetime television. Dr. Ruth's website was launched in 1996. Dr. Ruth Westheimer has been nominated for four CableACE Awards. 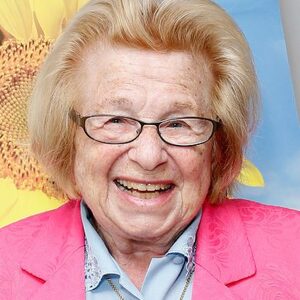