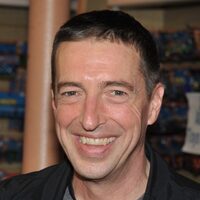 He was born Ronald Prescott Reagan on May 20, 1958, in Los Angeles, California. Even though he was the son of Ronald Reagan, the 40th President of the USA from 1981 to 1989, Ronald Jr undertook a completely different life path from his father's. Only after one semester at Yale, he dropped out of college to become a ballet dancer and even joined the Joffrey Ballet in pursuit of his dream. However, what's made Reagan known was expressing his liberal views, which were diametrically opposite to those of his conservative father. He previously hosted a daily three-hour show talk radio show and and a daily show on Air America Radio. He is currently a contributor to MSNBC.

Ron might be most well-known to recent audiences as the public face American atheists, having appeared in several commercials supporting his atheist believes.  Ronald Reagan Jr currently resides in Seattle. He was married to Doria Palmieri, a clinical psychologist from 1980 until her death in 2014.