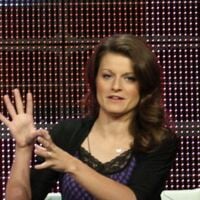 Robyn Brown net worth: Robyn Brown is an American reality television personality who has a net worth of $600 thousand. Robyn Brown was born in Utah in October 1978. She is best known for being featured on the TLC reality television series Sister Wives from 2010 to 2011. She married the patriarch of the Brown family Kody Brown in 2010. She was also married to David Preston Jessop from 1999 to 2007. Robyn Brown authored the book Becoming Sister Wives: The Story of an Unconventional Marriage. As an actress she appeared in an episode of the TV series Just Shoot Me! In 2000 and in the TV movie CMT 2000 Countdown in 2000. Sister Wives began airing in 2010 and follows the life of a polygamist family with Kody Brown and his four wives and 18 children. Robyn and Kody's children are David Dayton, Aurora Alice, Breanna Rose, Solomon Kody, and Ariella Mae.