Robert Crumb net worth: Robert Crumb is an American cartoonist and musician who has a net worth of $20 million dollars. Robert Crumb was born in Philadelphia, Pennsylvania and began drawing comics with his brothers when he was in his early teens. They sold their work door-to-door. He then went on to work for the American Greetings card company for many years.

He subsequently relocated to San Francisco in the late 60s, and went on to produce what is widely recognized to be the first successful comic to come out of the underground comix movement, "Zap Comix", in 1968. Since then, he has gone on to create some of the most popular and controversial comics and comic characters of the last 50 years, including Fritz the Cat, Mr. Natural, "Weirdo", and "Keep on Truckin'". He often collaborates with his wife, fellow cartoonist, Aline Kominsky-Crumb, and has won numerous awards for his work. 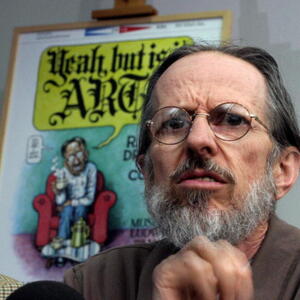