What is Rick Riordan's Net Worth?

Rick Riordan is an American author who has a net worth of $40 million. Rick Riordan is best known for writing the "Percy Jackson & the Olympians" book series which have sold more than 30 million copies worldwide to date. At various points in his career, Rick has been one of the highest paid authors in the world. For example, he earned $13 million in 2014 and $11 million in 2017. As of this writing, two feature films based in the Percy Jackson universe have been produced and released to wide critical and commercial success. The two films, which starred Logan Lerman as Percy, have generated more than $400 million at the worldwide box office. A Disney+ series based on the novels began filming in mid-2022 and is expected to debut in 2024.

Riordan began his career by teaching English and Social Studies for eight years at Presidio High School in San Francisco. While he was always interested in writing, he didn't actually publish his first book until 1997 when he was 33 years old, after years of being a teacher. His first book was "Big Red Tequila." It was the first book in the series "Tres Navarre" and is a fast-paced crime story. The novel won the Anthony Award for best original paperback and the Shamus Award for best First Private Investigator novel in 1997.

Over the next decade, Riordan published six more books in the "Tres Navarre" series – "The Widower's Two-Step," "The Last King of Texas," "The Devil Went Down to Austin," "Southtown," "Mission Road," and "Rebel Island." He published the final book in the series in 2008. "The Widower's Two-Step" won the Edgar Award for Best Paperback Original in 1999.

While working on the "Tres Navarre" series, Riordan also published the first book in the "Percy Jackson & the Olympians" series in 2005. The series focuses on the titular character, a twelve year old boy, who discovers he is the modern-day son of the ancient Greek god Poseidon. The first book, "The Lightning Thief," won the Adult Library Services Association Best Books for Young Adults award and the Mark Twain Award, in addition to a number of others. Riordan continued publishing books in the series over the next four years – "The Sea of Monsters," "The Titan's Curse," "The Battle of the Labyrinth," and "The Last Olympian." He has also recently written a sixth book, "The Chalice of the Gods," which completes the series.

The series itself has won numerous awards and has inspired a sequel series called "The Heroes of Olympus." The series contains five books – "The Lost Hero," "The Son of Neptune," "The Mark of Athena," "The House of Hades," and "The Blood of Olympus" – all published between 2010 and 2014. 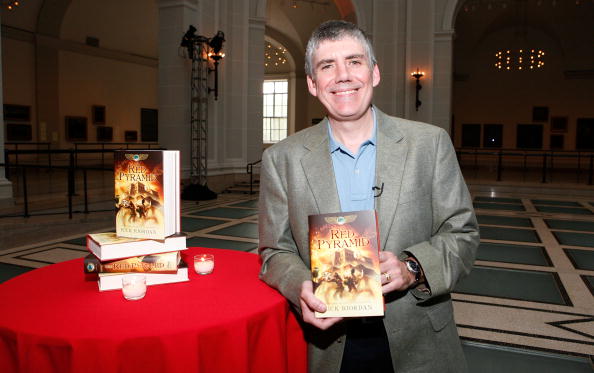 While working on "The Heroes of Olympus," Riordan was simultaneously writing another series called "The Kane Chronicles," which is comprised of three books. He published the first, "Red Pyramid," in 2010 followed by "The Throne of Fire" in 2011 and "The Serpent's Shadow" in 2012. The books are based on Egyptian mythology.

In 2013, Riordan published "The Son of Sobek," a fantasy short story. He then published "The Staff of Serapis" in 2014 and "The Crown of Ptolemy" in 2015. He later compiled the stories together, as they are related, in published them as an anthology called "Demigods and Magicians" in 2016.

In 2015, he started working on his next series, a trilogy called "Magnus Chase and the Gods of Asgard." The trilogy includes the books "The Sword of Summer," "The Hammer of Thor," and "The Ship of the Dead," published in 2015, 2016, and 2017, respectively. The trilogy is based on Norse mythology and is set in the same universe as "The Kane Chronicles."

In 2016, he began publishing what would become a sequel series to the "Heroes of Olympus" books called "The Trials of Apollo." The series consists of five books – "The Hidden Oracle," "The Dark Prophecy," "The Burning Maze," "They Tyrant's Tomb," and "The Tower of Nero," all published between 2016 and 2020.

Other projects that Riordan has worked on include "The 39 Clues" series, a series of adventure novels written in collaboration by a variety of authors. Riordan contributed three books to the series in 2008, 2010, and 2011. Many of Riordan's books which are set in the Percy Jackson universe have also inspired graphic novels. He has written ten graphic novels based on his previous books. Additionally, he has also published standalone novels like "Daughter of the Deep" and "The Sun and the Star."

In 1985, Riordan married his wife Becky on the couple's shared birthday. Together, they have two sons, Haley and Patrick. In 2013, they moved from their home in San Antonio to Boston.