Reza Aslan Net Worth: Reza Aslan is an Iranian-American writer, scholar, and professor who has a net worth of $3 million. Reza Aslan was born in Tehran, Iran in May 1972. His family moved to the United States in 1979 fleeing the Iranian Revolution. He grew up in the San Francisco area and taught courses at De La Salle High School in the 1990s.

He holds a Bachelor's degree in religions from Santa Clara University, a Master of Theological Studies from Harvard Divinity School, a Master of Fine Arts from the University of Iowa's Writers' Workshop, and a Doctor of Philosophy from the University of California, Santa Barbara. Aslan is a member of the American Academy of Religion. He has authored the international best-selling books No god but God: The Origins, Evolution, and Future of Islam and Zealot: The Life and Times of Jesus of Nazareth. He has written for the Christian Science Monitor, the Los Angeles Times, The Boston Globe, The New York Times, The Washington Post, the Chicago Tribune, and the Guardian. Aslan has appeared on NPR, PBS, Meet the Press, The Daily Show with Jon Stewart, The Colbert Report, Real Time with Bill Maher, Hardball, Nightline, and Anderson Cooper 360. In October 2014 he published a New York Times article "Bill Maher Isn't the Only one Who Misunderstand Religion" regarding characterizing female genital mutilation as an "Islamic problem". Aslan has published a total of seven books. 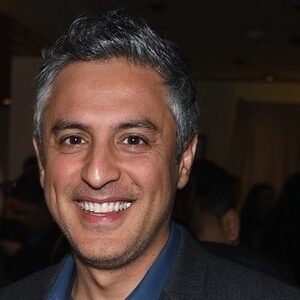