Ray Bradbury Net Worth:Ray Bradbury was an American writer who had a net worth of $30 million. Born in Waukegan, Illinois, in 1920, Ray Bradbury is best remembered for penning the classic dystopian novel "Fahrenheit 451" in 1953. Bradbury started writing when he was eleven years old and his family moved to Los Angeles three years later.

As a teen, he was enthralled by Hollywood and usually snuck into the Uptown Theater to watch movies. He soon began submitting his short stories to publishers and his piece, "Homecoming", appeared in "Mademoiselle" magazine, winning a spot in The O. Henry Prize Stories of 1947. During the late '30s, he started writing sci-fi stories and acting in stage productions. In 1950, he published his first novel, "The Martian Chronicles", and a year later, "The Illustrated Man" hit bookshelves. Three years later, he wrote "Fahrenheit 451". He is credited with 27 novels and more than 600 stories; an estimated eight million copies of his books have been sold around the world. Bradbury won a Daytime Emmy Award in 1994 for "The Halloween Tree" and a National Medal of the Arts a decade later. In 2007, he was honored with a Pulitzer Prize for his distinguished career accomplishments. He married Marguerite McClure in 1947 and they stayed together until she died in 2003. They had four daughters together, and his wife was the only woman Bradbury ever dated. He died after a long bout with illness on June 5, 2012, in Los Angeles. 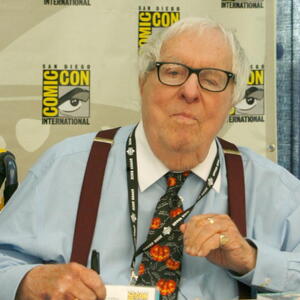