R.L. Stine Net Worth: R.L. Stine is an American author, screenwriter, and producer who has a net worth of $200 million. Stine is best known for penning wildly popular children's and young adult books with horror themes, such as the "Goosebumps" and "Fear Street" series. With more than 330 books to his name, he is one of the most successful authors of the last several decades, having sold more than 400 million books worldwide. Also known as Eric Affabee and Jovial Bob Stine, R.L. has been described as "one of the best-selling authors in history" and the "Stephen King of children's literature." The "Goosebumps" books have been adapted into a horror anthology TV series (1995–1998) as well as the hit films "Goosebumps" (2015) and "Goosebumps 2: Haunted Halloween" (2018), which grossed $158.3 million and $93.3 million at the box office, respectively. In August 2020, it was announced that three "Fear Street" films would be coming to Netflix in the summer of 2021. Stine is credited as a writer on more than 100 film and television projects, and he served as a producer on "The Nightmare Room" (2001–2002), "The Haunting Hour: Don't Think About It" (2007), "Mostly Ghostly" (2008), "Mostly Ghostly: Have You Met My Ghoulfriend?" (2014), "R.L. Stine's Monsterville: Cabinet of Souls" (2015), "Mostly Ghostly: One Night in Doom House" (2016), and "Just Beyond" (2021).

Early Life: R.L. Stine was born Robert Lawrence Stine on October 8, 1943, in Columbus, Ohio. He grew up in a Jewish household in Bexley, Ohio, with mother Anne and father Lewis (a shipping clerk), younger brother Bill, and younger sister Pam. At age 9, R.L. found a typewriter in the attic and began writing stories and joke books. He attended Cassingham Elementary School and Bexley High School, and after graduating in 1961, he enrolled at Ohio State University, earning a Bachelor of Arts in English in 1965. As a college student, Stine was the editor of the school's humor magazine "The Sundial." In 1967, he moved to New York City to pursue a writing career.

Career: After moving to NYC, Stine began writing for Scholastic school magazines, then he wrote numerous joke books and humor books for children under the name Jovial Bob Stine. He created a humor magazine called "Bananas," which ran from 1975 to 1984; he was the magazine's editor and did much of the writing. R.L. wrote his first horror novel, "Blind Date," in 1986, and three years later, he created the "Fear Street" series, starting with "The New Girl," and has gone on to write more than 100 books in the series. He co-created the Nickelodeon series "Eureeka's Castle,' which aired from 1989 to 1995, and he served as the head writer. The "Goosebumps" book series began in 1992, and a TV series based on the books aired on Fox Kids and YTV from 1995 to 1998. The series also spawned the video games "Attack of the Mutant," "Escape from HorrorLand," and "Goosebumps HorrorLand," and in 2015, Stine was portrayed by Jack Black in the "Goosebumps" film.

In 1995, R.L. published his first novel for adults, "Superstitious," and later published three more: "The Sitter" (2003), "Eye Candy" (2004), and "Red Rain" (2012). From 2000 to 2010, R.L. worked on the "Fear Street" and "Goosebumps Horrorland" series as well the "Mostly Ghostly," "The Nightmare Room," and "Rotten School" series and two stand-alone vampire novels, "Dangerous Girls" (2003) and "The Taste of Night" (2004). "The Haunting Hour Volume One: Don't Think About It," a direct-to-DVD movie, was released in 2007 and was followed by "The Haunting Hour: The Series" in 2010. In 2003, several theme parks, including SeaWorld San Diego and Busch Gardens Tampa Bay, began showing the short 4D movie "R. L. Stine's Haunted Lighthouse," which starred Christopher Lloyd, Lea Thompson, and Michael McKean and featured a cameo by "Weird Al" Yankovic. 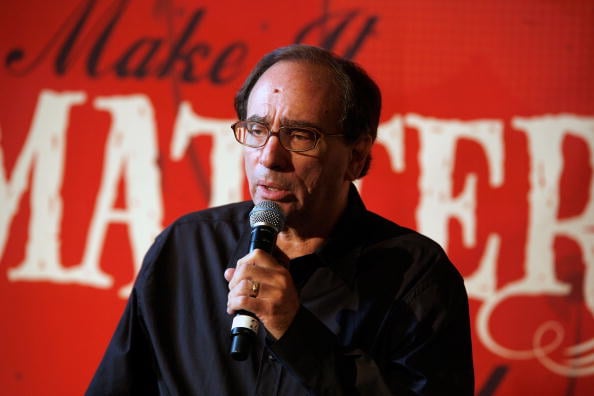 After taking a break from "Fear Street" in 2005, Stine brought the series back in 2014 with "Party Games." That year the birth of his grandson inspired R.L. to write his first picture book, "Little Shop of Monsters," which was illustrated by Marc Brown, who is known for the "Arthur" book series. In 2019, Stine lent his voice to the "Fright Night" episode of the animated "Arthur" TV series, and in 2021, he appeared as himself in an episode of the HBO Max series "Search Party." He has also had cameos in both "Goosebumps" films, and he hosted season one of the "Goosebumps" TV series. In 2020, Stine began publishing the illustrated "Garbage Pail Kids" series, and it was announced that Sony Pictures Television was working on a new live-action "Goosebumps" TV series.

Personal Life: R.L. married writer/editor Jane Waldhorn on June 22, 1969. Jane co-founded the publishing house Parachute Press in 1983, and in addition to developing and publishing her husband's books, Parachute has published works by Mary Kate and Ashley Olsen. Stine and Waldhorn welcomed son Matthew on June 7, 1980; Matthew owns the independent record label 27 Sound Entertainment, and he produces music for the label's artists. R.L.'s official website offers the free, 16-page R.L. Stine Writing Program, which is "designed to help students overcome their anxiety about writing by providing a writing process that can be followed in a step-by-step manner."

Awards and Honors: Stine was ranked #36 on "Forbes" magazine's list of the "40 best-paid entertainers" of 1996–1997, with an income of $41 million. In the 1990s, "USA Today" named him America's best-selling author for three consecutive years. R.L. received the Free Public Library of Philadelphia's Champion of Reading Award in 2002, and in 2003, he was named the best-selling children's book series author of all time by the Guinness Book of World Records (followed by "Most Prolific Author of Children's Horror Fiction Novels" in 2011). He received a Lifetime Achievement Award from the Horror Writers Association in 2014, and he was honored with a Silver Bullet Award from the Thriller Writers of America in 2007. Stine was presented with an Inkpot Award at Comic-Con International in 2017, and he has also received three "Disney Adventures" Kids' Choice Awards for Best Book-Mystery/Horror and three Nickelodeon Kids' Choice Awards. 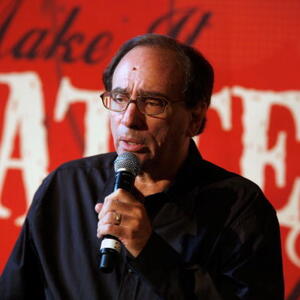