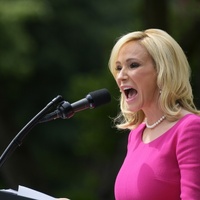 Pastor Paula White net worth: Pastor Paula White is an American Christian evangelist, teacher, author, and television personality who has a net worth of $5 million. Pastor Paula White was born in Tupelo, Mississippi, and had a tough childhood. Her parents divorced when she was five, and her father subsequently committed suicide. The family became impoverished, and her mother turned to alcohol. Paula White was left in the care of multiple strangers, many of which were sexually and physically abusive. Her mother remarried, and the family moved to Maryland. She became a Christian in the mid-80s, and went on to launch her own church with Randy White, called Without Walls International Church. The church, which was originally known as the South Tampa Christian Church, struggled during its early years, and the Whites lived off the kindness of the congregation and the government. The church eventually grew to 20,000 members. She and Randy White divorced, and she is now the Senior Pastor for New Destiny Christian Center. She hosts the popular show, "Paula White Today" on the Trinity Broadcast Network, and has published ten books.