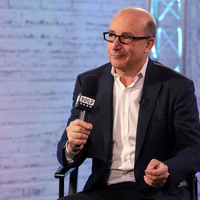 Paul McKenna net worth: Paul McKenna is an English hypnotist and self-help book author who has a net worth of $100 million. Born in Enfield, England on November 8, 1963, Paul McKenna has inspired many with his words on weight loss, Zen, and self-motivation. He began working in radio at age sixteen, eventually working for companies such as BBC One, Capital Radio, Chiltern Radio, Radio Jackie, and Radio Caroline. McKenna's interest in hypnotism evolved from a guest of one of his radio shows. He began dabbling in hypnotism himself based on self-motivation interest and later for entertainment value. His success in small-time hypnotism led to bigger shows and larger clients such as Ellen DeGeneres. Beginning in the 1990s, McKenna hosted a series of shows based off his hypnotism and later signed a deal with the Discovery Channel. It is still the largest television deal to date with a British personality. He has become one of the most successful non-fiction booksellers with his titles I Can Make You Thin and I Can Make You Happy, among others. He possesses two doctorate degrees after attending St. Ignatius Secondary School in London and East Hertfordshire College in his younger years as well as LaSalle University in Louisiana and the International Management Centres Association. McKenna's most prominent influence has been Richard Bandler.