Paul Finebaum Net Worth: Paul Finebaum is an American sports author, television and radio personality and former columnist who has a net worth of $2 million. Paul Finebaum was born in 1955 in Memphis, Tennessee. While attending the University of Tennessee in Knoxville he applied for a job as a sportswriter for the Daily Beacon campus newspaper.

After graduating in 1978 with a degree in liberal arts, he interviewed in Bristol, Tennessee with the Herald-Courier and in Louisiana for the Shreveport Times, eventually taking a job with the Birmingham (Alabama) Post-Herald. Finebaum's first big scoop came his first year in Birmingham when he wrote a story exposing recruiting violations by Alabama in the signing of Huntsville basketball player Bobby Lee Hurt. The job offers he got as a result of his first reporting award evaporated when he was hit with his first lawsuit. The Post-Herald defended their rookie reporter and won the case. Finebaum went on to serve as host of the Paul Finebaum Radio Network, whose flagship station was on WJOX-FM. The show was syndicated in Alabama (27 stations), Mississippi (2 stations), Tennessee (3 stations) and on single stations in Arkansas, Florida, Georgia and South Carolina; it was also heard Sirius XM Radio (Channel 84). He's been a guest on television's Larry King Live, CBS' 60 Minutes, Nancy Grace, MSNBC's Morning Joe, HBO and Tru TV. Finbaum has been awarded many honors, including being named by The Tennessean as one of the Southeastern Conference's Top Power Brokers; being named One of the SEC's 10 Most Powerful People by the Orlando Sentinel; receiving Honorable Mention along with 10 other names for Best National Radio Voice by Sports Illustrated; being presented with the Accomplished Alumni Award, which recognizes notable alumni for their success and distinction within their field by the University of Tennessee, among others. In April 2014, Paul Finebaum returned to his Tennessee alma mater to give the keynote speech at the annual UT Social Media Workshop. 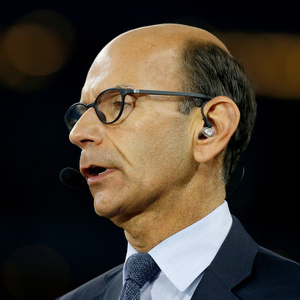