Paul Auster Net Worth: Paul Auster is an American author and director who has a net worth of $20 million. Paul Auster was born in Newark, New Jersey in February 1947. Paul graduated from Columbia University and moved to Paris, France to translate French literature. His first fiction novel Squeeze Play was published in 1982 under the pseudonym Paul Benjamin.

Auster went on to publish 18 novels including The New York Trilogy. His first book of poetry Unearth was published in 1974 and he has published seven poetry books. He has written five screenplays and eight books that consist of essays, memoirs, or autobiographical material. Some of his best known works include Moon Palace in 1989, The Music of Chance in 1990, The Book of Illusions in 2002 and The Brooklyn Follies in 2005. Auster writes a mix of crime fiction, existentialism, absurdism, and the search for personal meaning and identity. He has won several IMPAC Awards as well as an Independent Spirit Awards for Best First Screenplay for Smoke, and a Prince of Asturias Award. For Smoke he was also nominated for Cesar Award for Best Foreign Film in 1996. 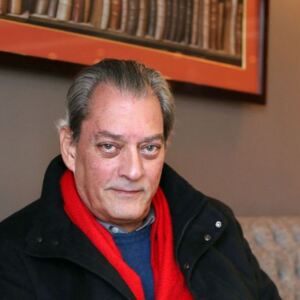