Nina Garcia net worth: Nina Garcia is a Colombian fashion critic and journalist who has a net worth of $3 million dollars. Nina Garcia was born in Barranquilla, Colombia in 1965. She graduated from Boston University in 1987. She then attended Ecole Superieure de la Mode in France and earned a second B.A. from the Fashion Institute of Technology in 1992. She began her professional career in the public relations departments of fashion designers Perry Ellis and Marc Jacobs. From there she made the leap to fashion magazines. Her first magazine job was as an assistant stylist and market editor for Mirabella and then moved to Elle Magazine. In 2000, Garcia became Fashion Director of Elle, and held the position for the next eight years. She left that position in April 2008 and became Editor-at-Large until September 1, 2008.  From 2008 to 2012 she was the fashion director of Marie Claire. In 2012, Garcia was named the creative director for Marie Claire. In September 2017, Garcia returned to Elle as Editor-in-Chief.

Garcia is also the author of four books on fashion. In September 2007, The Little Black Book of Style was released. In August 2008, The One Hundred: A Guide to the Pieces Every Stylish Woman Must Own was released. Her third book hit the shelves in August 2009 and is called The Style Strategy. Her fourth book, Nina Garcia's Look Book, was published in September 2010.

Garcia is most widely recognized as one of the judges on the reality television show, "Project Runway", and has been with the series since its first season. She has hosted the red carpet for ABC's Oscar telecast and serves as a style expert on programs including Good Morning America, The View, Today, and CNN.

Garcia was diagnosed with carrying the BRCA gene, which carries with it a higher risk of contracting breast cancer. In early 2019, Garcia made the decision to undergo a preventative double mastectomy after some abnormalities were revealed on a recent scan.

Garcia is married to David Conrod, the CEO of Focus Point Private Capital Group. The couple has two children. 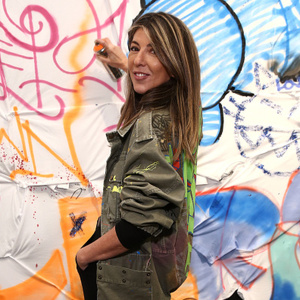