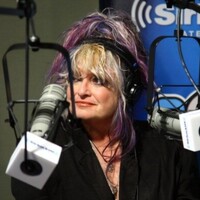 Nina Blackwood net worth: Nina Blackwood is an American disc jockey and music journalist who has a net worth of $500 thousand. Nina Blackwood was born in Springfield, Massachusetts in September 1955. She is known for being one of the original five MTV VJs. In 1978 Blackwood appeared nude in Playboy. She moved to California to pursue her acting career. Blackwood became an original MTV VJ in 1981 until 1986. She hosted the Rock Report for Entertainment Tonight and then the TV series Solid Gold from 1986 to 1988. As an actress she has starred in the movies Vice Squad, Ratboy, Reckless Kelly, Number One Fan, I Crave Rock & Roll, and Citizens. Blackwood has also hosted radio shows including Nina Blackwood's Absolutely 80's, New Wave Nation, The 80s on 8, and The Big '80s Top 40 Countdown. The 1984 John Waite song "Missing You" was written about Blackwood.