Niall Ferguson Net Worth: Niall Ferguson is a British historian who has a net worth of $500 thousand. Known for his provocative and opposing views, Niall Ferguson established himself as a specialist in international and economic history, especially for hyperinflation and the bond markets, as well as British and American imperialism.

Born Niall Campbell Douglas Ferguson on 18 April 1964 in Glasgow, Scotland, he was raised atheist and maybe that made him excel in secular studies. It was in 1985 that he graduated with a first-class honors degree in history from Magdalen College, Oxford where he went on to take his D.Phil four years later. Since, he has become the Laurence A. Tisch Professor of History at Harvard University, a Senior Research Fellow of Jesus College (Oxford University), a Senior Fellow of the Hoover Institution (Stanford University) as well as a visiting professor at the New College of the Humanities. In addition to being actively involved in the field of teaching, Ferguson penned several books that include "Empire: How Britain Made the Modern World", "The Ascent of Money: A Financial History of the World" and "Civilization: The West and the Rest". He got the chance to present all of the three on the Channel 4 television series. Named one of the 100 most influential people in the world by Time magazine, Niall Ferguson has also served as a contributing editor for Bloomberg Television and a columnist for Newsweek. In the field of politics, he advised John McCain's U.S. presidential campaign in 2008, and gave support to Mitt Romney in 2012 when he loudly criticized Barack Obama. 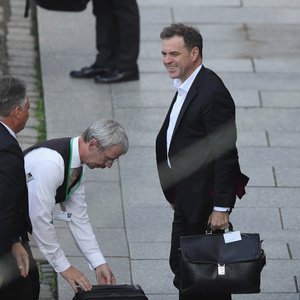