Muhammad Yunus net worth: Muhammad Yunus is a Bangladeshi entrepreneur, bank, civil society leader, and economist who has a net worth of $10 million. Muhammad Yunus was born in Chittagong, Bengal Presidency, British India in June 1940. He was awarded a Nobel Peace Prize for pioneering the concepts of microfinance and microcredit, and for founding the Grameen Bank.

In 2009 Yunus received the United States Presidential Medal of Freedom and in 2010 he won the Congressional Gold Medal. In 2011 he co-founded Yunus Social Business – Global Initiatives which helps social businesses around the world. Yunus became Chancellor of Glasgow Caledonian University in Scotland in 2012 and is a member of the advisory board for Shahjahal University of Science and Technology. He is a member of the board of directors of the United Nations Foundation. Yunus graduated from the University of Dhaka, the University of Colorado, Boulder, and Vanderbilt University. He has also won an Independence Day Award, World Food Prize, Pfeffer Peace Prize, Gandhi Peace Prize, and Aga Khan Award for Architecture. 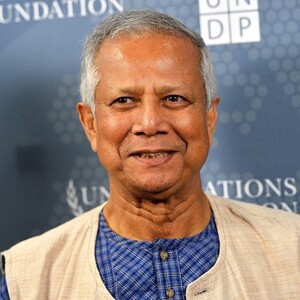