Mitch Albom net worth: Mitch Albom is an American best-selling author, screenwriter, journalist, broadcaster, and musician who has a net worth of $10 million. His books have sold over 35 million copies worldwide and he is best known for writing Tuesdays with Morrie, The Five People You Meet in Heaven, For One More Day, The Time Keeper, and Have a Little Faith.

He was born in Passaic, New Jersey and lived in Buffalo, New York for a while as a child before his family settled in Oaklyn, New Jersey. He grew up in a small, middle-class neighborhood and with a very supportive and loving family. He attended the Columbia University Graduate School of Journalism. Upon graduating, he freelanced for publications like Sports Illustrated, GEO and The Philadelphia Inquirer; he also covered several Olympic events in Europe. His sports column quickly became popular and in 1989, while working with the Detroit Free Press, Albom's career expanded when he was asked to add a weekly non-sports column to his duties for the company. His column ran on Sundays in the Comment section and dealt with American life and values; it was eventually syndicated across the country. Many of his columns have been collected into anthology books including a four series set of books entitled Live Albom I-IV. In addition to his work as a journalist, Albom has written a number of books, and many have them have been turned into films. In 1995, he married Janine Sabino. That same year he re-encountered Morrie Schwartz, a former college professor who was dying of ALS, also known as Lou Gehrig's disease. His visits with Schwartz would lead to the book Tuesdays with Morrie, which moved Mitch away from sports and began his career as an internationally recognized author. Albom has founded seven charities, many in the metropolitan Detroit area, where he currently lives with his wife. 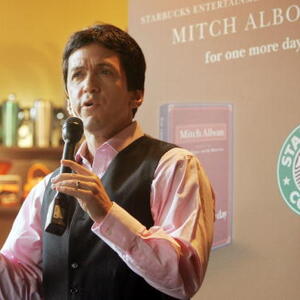