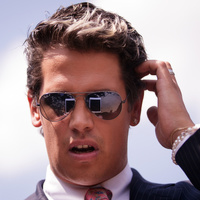 Milo Yiannopoulos Net Worth: Milo Yiannopoulos (also known as Milo Andreas Wagner) is a British journalist, author, and internet troll who has a net worth of -$2 million. Before becoming an internet personality, he served as the senior editor for the far-right website Breitbart News from 2014 to 2017. Yiannopoulos also founded the online tabloid magazine "The Kernel," which he sold to Daily Dot Media in 2014. Milo has sparked controversy for his critical views on Islam, third-wave feminism, political correctness, and social justice. Despite being openly gay, he has at times been referred to as a spokesperson for the alt-right, which traditionally has held anti-gay views. In 2016, Milo Yiannopoulos was permanently banned from Twitter for "inciting or engaging in the targeted abuse or harassment of others" after making offensive comments to comedian Leslie Jones. He has since been de-platformed from most mainstream channels including Facebook, Instagram, and YouTube.

In 2017, Yiannopoulos independently released his autobiography, "Dangerous." He lost a multi-million-dollar book deal in February 2017 after several conversations came to light which featured Milo speaking controversially about pedophilia. He was also forced to resign from Breitbart in the wake of the controversy after several editors at the site vowed to quit if he was not fired. Yiannopoulos has released four books since the publication of "Dangerous": "Diabolical: How Pope Francis Has Betrayed Clerical Abuse Victims Like Me – and Why He Has to Go" (2018), "Middle Rages: Why the Battle for Medieval Studies Matters to America" (2019), "How to Be Poor" (2019), and "How to Be Straight" (2019).

Early Life: Milo Yiannopoulos was born Milo Hanrahan on October 18, 1984, in Kent, England. His parents divorced when he was young, and he was raised by his mother and stepfather. When he was a teenager, Milo moved in with his paternal grandmother, whose surname was Yiannopoulos. Milo attended Canterbury's Simon Langton Grammar School for Boys until he was expelled, and he later enrolled at the University of Manchester and Wolfson College, Cambridge, but he dropped out of Manchester and was expelled from Wolfson.

Career: After dropping out of school, Yiannopoulos worked at "The Catholic Herald" and "The Daily Telegraph." He co-founded "The Kernel" in November 2011, but it was shut down in March 2013 after several of the publication's former contributors and staff members alleged that they had not been paid. Milo settled the debts and reopened "The Kernel" later that year. In 2014, Daily Dot Media bought the magazine, and Yiannopoulos moved on to Breitbart while still serving as an adviser on "The Kernel." In October 2015, Milo took over the "Breitbart Tech" section of the Breitbart News Network, and he held the position until he resigned in February 2017. In 2014, he was a vocal supporter of Gamergate, a harassment campaign that targeted females working in the video game industry. In October 2017, BuzzFeed News gained access to emails from Milo's time at Breitbart showing that he often solicited comments and story ideas from alt-right and neo-Nazi figures. Yiannopoulos has been classified as "alt-lite" by the Anti-Defamation League.

Milo has embarked on several tours, often resulting in protests and cancelled or denied visas. At a protest outside a January 2017 event at the University of Washington, a man was shot by a woman who went there to provoke the protesters. The following month, a protest occurred outside UC Berkeley, and more than 100 "masked agitators" showed up to interrupt the protest by setting fires, attacking protesters, and damaging property. The event was then cancelled by the UC Police Department.

Controversies: Milo's Twitter account was temporarily suspended twice before being permanently suspended in July 2016 after tweeting statements that seemed to be encouraging racist and sexist abuse toward "Ghostbusters" actress Leslie Jones. He was banned from Facebook in May 2019, along with other figures who "promote or engage in violence and hate." In 2016, Milo created the Yiannopoulos Privilege Grant, a scholarship fund for white men, and later that year, more than $250,000 went missing from the fund. He denied that he spent the missing money and said he had mismanaged the fund; by early 2018, he closed the Yiannopoulos Privilege Grant down.

When it was announced that Milo would be speaking at the 2017 Conservative Political Action Conference (CPAC), a Canadian high school student requested that Reagan Battalion, a conservative website, post video clips in which Yiannopoulos defended pedophilia. As a result, he lost his speaking gig at CPAC, and Simon & Schuster decided not to publish his autobiography. In 2018, it was reported that Milo had texted a reporter "I can't wait for the vigilante squads to start gunning journalists down on sight." When a gunman killed five people at the "Capital Gazette" two days later, Yiannopoulos said that his comment had been a joke and wasn't responsible for the mass shooting.

Personal Life: Yiannopoulos married his longtime boyfriend, John (last name unknown), in September 2017 in Hawaii. Milo has described himself as "the most fabulous supervillain on the Internet," and he was originally a supporter of the UK's Conservative Party but switched over to the UK Independence Party in 2018. He was a supporter of Donald Trump during the 2016 presidential election, but in a May 2020 interview with "The Washington Times," he said that Trump does not deserve a second term because "he defrauded us." Yiannopoulos often criticizes Islam, and after the 2016 mass shooting at Orlando's Pulse nightclub, he said that the entire religion was responsible for the poor treatment of homosexuals and women. He has called feminism "a mean, vindictive, sociopathic, man-hating movement" and described homosexuality as "a lifestyle choice" and has called it a sin.

Financial Problems: In September 2019, a number of news outlets reported that Milo was "flat broke" and perhaps as much as $2 million in debt. According to paperwork filed as part of a lawsuit in Australia, Milo owes at least $2 million to various lawyers and financial backers. He reportedly owes $400,000 to Robert Mercer, the billionaire conservative. In a snarky Instagram post, Milo himself claimed that the debt was closer to $4 million. At one point he attempted to raise funds to pay off the debt via Patreon, but he was swiftly booted from the platform.