Mike Emrick net worth: Mike Emrick is an American sports commentator who has a net worth of $2 million. Mike Emrick was born in La Fontaine, Indiana in August 1946. He is best known for being an ice hockey commentator and works as the lead announcer for national telecasts of the NHL on NBC and NBC Sports. He graduated from Manchester University and then received his master's degree from Miami University before earning his Ph.D. in Communications from Bowling Green State University, earning the nickname "Doc". He taught at Geneva College and worked as an unpaid correspondent covering the Pittsburgh Penguins for the local newspaper. He was hired to do play-by-play and public relations for the Port Huron Flags of the IHL and then worked for the Maine Mariners of the AHL. His first NHL job was as the New Jersey Devils' first announcer from 1982 to 1986. Emrick has worked for CBS, ABC, ESPN, TNT, Fox, and more. He won the NHL's Lester Patrick Award in 2004 and the Foster Hewitt Memorial Award by the Hockey Hall of Fame in 2008. He became the first media member inducted into the U.S. Hockey Hall of Fame in 2011. 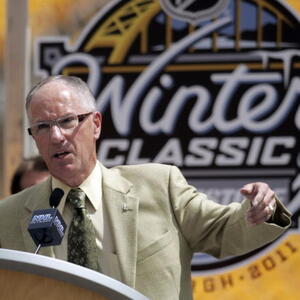