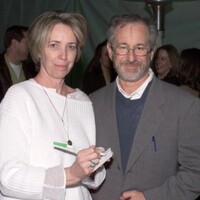 Melissa Mathison Net Worth: Melissa Mathison was an American screenwriter and activist who had a net worth of $100 million at the time of her death in 2015. Melissa was a highly successful screenwriter, probably most-notable for penning E.T. the Extra Terrestrial. The vast majority of her fortune at the time of her death came from her 2004 divorce from actor Harrison Ford. Harrison paid Melissa an estimated $90-120 million in cash and property. It is one of the most-expensive celebrity divorces of all time.

Mathison worked as a location assistant on the film The Godfather: Part II and an executive assistant for the movie Apocalypse Now. For E.T., she won awards from the Academy of Science Fiction, Fantasy & Horror Films, Los Angeles Film Critics Association, and Writers Guild of America, and was nominated for an Academy Award, a Golden Globe Award, and a BAFTA Award.

Melissa was married to Harrison Ford from 1983 to 2004. They had two children together. Melissa Mathison passed away on November 4, 2015 at 65 years old from neuroendocrine cancer.