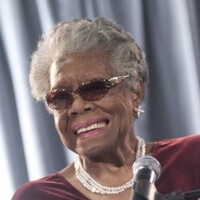 What was Maya Angelou's Net Worth?

Maya Angelou was an American poet, author, teacher, activist, actress, and public speaker who had a net worth of $10 million at the time of her death in 2014. The author of 36 books, Angelou is probably most famous for writing the 1969 autobiography "I Know Why the Caged Bird Sings," which quickly became an international bestseller and is still standard reading material in many high schools.

Early in life, Maya marched with and was friends with both Dr. Martin Luther King, Jr. and Malcolm X. During her career, she was honored with the Presidential Medal of Freedom, the National Medal of Arts, three Grammys, and numerous other awards, and she famously read her poem "On The Pulse of Morning" at Bill Clinton's Presidential inauguration in 1993.

As an actress, Angelou appeared in "Roots" (1977), "Poetic Justice" (1993), "How to Make an American Quilt" (1995), and "Madea's Family Reunion" (2006), and she received a Tony nomination for Best Featured Actress – Play for her performance in "Look Away" in 1973. Sadly, Maya passed away in May 2014 at the age of 86. When Angelou's agent announced her passing, he explained that she had recently been frail and spent time in the hospital recovering from a mystery illness.

Maya Angelou was born Marguerite Annie Johnson on April 4, 1928, in St. Louis, Missouri. Her mother, Vivian, was a nurse, and her father, Bailey, worked as a navy dietician and a doorman. Angelou's older brother, Bailey Jr., gave her the nickname "Maya." Angelou's parents divorced when she was 3 years old, and her father put Maya and Bailey Jr. on a train to Stamps, Arkansas, to go live with his mother, Annie Henderson. When Angelou was 7, her father returned Maya and her brother to their mother's care in St. Louis, and Angelou was raped by her mother's boyfriend, Freeman, at the age of 8. Maya told Bailey Jr., and he informed the rest of the family of the crime, and though Freeman was found guilty, he only spent one day in jail. Four days after Freeman was released, he was murdered, leading Maya to become mute for nearly five years. She later said, "I thought, my voice killed him; I killed that man, because I told his name. And then I thought I would never speak again, because my voice would kill anyone." Maya and Bailey Jr. were sent back to their grandmother's home after Freeman's murder. Angelou attended the Lafayette County Training School, and teacher/family friend Bertha Flowers encouraged her to speak again, stating "You do not love poetry, not until you speak it." Maya and Bailey Jr. returned to their mother when Maya was 14. By that time, Vivian had moved to Oakland, California, and Angelou attended San Francisco's California Labor School after earning a scholarship to study drama and dance. At age 16, she became the city's first Black female streetcar conductor.

In the 1950s, Maya formed the dance team Al and Rita with choreographer Alvin Ailey, and they performed at San Francisco fraternal Black organizations. She later danced  professionally in clubs around the city under the name Marguerite Johnson, but her managers encouraged her to change her name, so she went with Maya Angelou, after her nickname and her married surname (though she had divorced her husband, Tosh Angelos, by this point). In the mid-1950s, Angelou toured Europe while appearing in a production of "Porgy and Bess," and she tried to learn the language of every country she traveled to. She recorded her first album, "Miss Calypso," in 1957, and after meeting novelist John Oliver Killens two years later, she moved to New York to focus on her writing career. Maya joined the Harlem Writers Guild and was soon published, and the following year, she met Martin Luther King Jr. and was involved in organizing the Cabaret for Freedom, which benefited the Southern Christian Leadership Conference (SCLC). Angelou was named the Northern Coordinator of SCLC, and around this time, she began taking part in anti-apartheid and pro-Castro activism. In 1961, she co-starred with James Earl Jones and Cicely Tyson in a production of the Jean Genet play "The Blacks." That year she also moved to Cairo with her boyfriend, freedom fighter Vusumzi Make, and worked for "The Arab Observer," an English-language newspaper, as an associate editor.

After Angelou and Make split up in 1962, Maya and her son, Guy, moved to Accra, Ghana, where Guy was set to attend college until a serious car accident interfered with his plans. While living in Ghana, Angelou worked as an administrator at the University of Ghana and a feature editor for the journal "The African Review," and she became friends with Malcolm X. In 1965, Maya returned to the U.S. to help Malcolm X establish the Organization of Afro-American Unity, but he was assassinated in February of that year. Angelou then moved to Hawaii (where her brother lived), Los Angeles, and New York, and Martin Luther King Jr. asked her to help him organize a march in 1968, but he was assassinated on April 4th, Maya's 40th birthday. Later that year, Angelou wrote, produced, and narrated the ten-part documentary series "Blacks, Blues, Black!" for National Educational Television. Her first autobiography, "I Know Why the Caged Bird Sings," was published in 1969, and she followed it with six more: "Gather Together in My Name" (1974), "Singin' and Swingin' and Gettin' Merry Like Christmas" (1976), "The Heart of a Woman" (1981), "All God's Children Need Traveling Shoes" (1986), "A Song Flung Up to Heaven" (2002), and "Mom & Me & Mom" (2013). 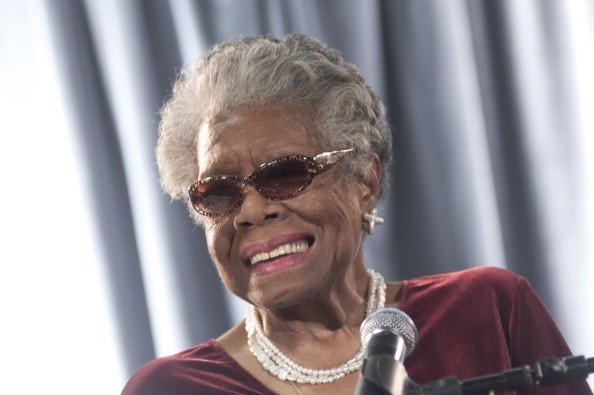 In 1972, Angelou's screenplay "Georgia, Georgia" became the first produced screenplay written by a Black woman. Over the next decade, she wrote for singer Roberta Flack, composed film scores, produced, directed, and starred in plays, and wrote poetry, autobiographies, television scripts, short stories, and more. She also became Oprah Winfrey's close friend and mentor during this time. In 1981, Maya moved to Winston-Salem, North Carolina, and accepted a lifetime Reynolds Professorship of American Studies at Wake Forest University. In 1993, she recited "On the Pulse of Morning" at Bill Clinton's inauguration, and she won a Grammy for the recording of the poem. In 1996, Maya directed the film "Down in the Delta" and collaborated with Ashford & Simpson on their album "Been Found," and in 2000, Hallmark began selling the Maya Angelou Life Mosaic Collection, which featured greeting cards and household items. In 2010, she donated memorabilia and personal papers to Harlem's Schomburg Center for Research in Black Culture, and she was a consultant for Washington, D.C.'s Martin Luther King, Jr. Memorial in 2011.

Maya was married to Enistasious "Tosh" Angelos from 1951 to 1954 and Paul Du Feu from 1974 to 1983. She had one child, Guy B. Johnson (born in 1945), who followed in his mother's footsteps and became a writer. In his late twenties, Guy was injured in a car accident and told he might never walk again. He asked Angelou to "pull the plug" if there was no hope of recovery, and Maya said of the request, "I started shouting. At the top of my voice I said, 'In that case, recovery. I see you swimming. I see you walking. I see you dancing. And I thank God for it, and I'm claiming it loudly.'" Guy eventually recovered and was able to walk out of the hospital; since his accident, he has published the novels "Standing at the Scratch Line" and "Echoes of a Distant Summer." Angelou enjoyed cooking and often hosted celebrations at her Winston-Salem home. Her skill in the kitchen led to Maya publishing two cookbooks, 2004's "Hallelujah! The Welcome Table" and 2010's "Great Food, All Day Long: Cook Splendidly, Eat Smart."

Leading up to her death on May 28, 2014, Angelou had been ill, resulting in the cancellations of a few scheduled appearances. At the time of her death, the 86-year-old had been working on a new autobiography, and she reportedly spent the last day of her life proofreading the book. Maya's family shared the news of her passing on social media, writing, "Dr. Maya Angelou passed quietly in her home before 8:00 a.m. EST. Her family is extremely grateful that her ascension was not belabored by a loss of acuity or comprehension. She lived a life as a teacher, activist, artist and human being. She was a warrior for equality, tolerance and peace. The family is extremely appreciative of the time we had with her and we know that she is looking down upon us with love." After Angelou's death, President Barack Obama paid tribute to her, calling her "a brilliant writer, a fierce friend and a truly phenomenal woman." On May 29th, the church Angelou had been a member of for three decades, Mount Zion Baptist Church, organized a public memorial service at Wake Forest University. The event was livestreamed on the school's website and featured speeches from Michelle Obama, Oprah Winfrey, and Bill Clinton. Another memorial was held at San Francisco's Glide Memorial Church on June 15th.

Angelou received numerous awards during her career, including a Coretta Scott King Award (1971), North Carolina Award in Literature (1987), Langston Hughes Medal (1991), Horatio Alger Award (1992), Frank G. Wells American Teachers Award (1995), Alston-Jones International Civil & Human Rights Award (1998), Mother Teresa Award (2006), Voice of Peace award (1998), and Norman Mailer Prize (2013). She was appointed to the  American Revolution Bicentennial Council (1975–1976) by President Gerald Ford and the Presidential Commission for International Women's Year (1977) by President Jimmy Carter, and President Barack Obama honored her with the Presidential Medal of Freedom in 2010. Maya was the Inaugural Poet at President Bill Clinton's 1993 inauguration, where she read her poem "On the Pulse of Morning," and in 2000, Clinton awarded her the National Medal of Arts. She has won three Grammys: Best Spoken Word Album for "On the Pulse of Morning" (1993) and "A Song Flung Up to Heaven" (2002) and Best Spoken Word or Non-Musical Album for "Phenomenal Woman" (1995). Angelou earned three NAACP Image Awards for Outstanding Literary Work, Nonfiction for "Even the Stars Look Lonesome" (1998), "Hallelujah! The Welcome Table" (2005), and "Letter to My Daughter" (2009).

Maya was inducted into the St. Louis Walk of Fame (1992), Arkansas Black Hall of Fame (1993), Rollins College Walk of Fame (1994), and National Women's Hall of Fame (1998), and she received  Lifetime Achievement Awards from the Ethnic Multicultural Media Awards (2002) and Conference of Minority Transportation Officials (2014). In 2015, the U.S. Postal Service issued a stamp in her honor, and in April 2021, it was announced that Angelou and Dr. Sally Ride would be the first two women featured on quarters as part of the American Women coin series. Maya received more than 50 honorary degrees from colleges and universities, such as Wake Forest University, Boston College, University of Southern California, and University of North Carolina at Greensboro.