He was a leader of the African-American Civil Rights Movement and was best known for helping advance civil rights utilizing nonviolent civil disobedience. King led the Montgomery Bus Boycott in 1955 and help to create the Southern Christian Leadership Conference in 1957. King also served as the first president of the SCLC. He led nonviolent protests in Birmingham, Alabama in 1963 that gained national attention which ultimately built a movement. He also helped organize the March on Washington in 1963 where he delivered his famous "I Have a Dream" speech. King was awarded the Nobel Peace Prize in 1964. In 1965 he organized the Selma to Montgomery marches. King graduated from Morehouse College and Crozer Theological Seminary. He then earned a Ph.D. from Boston University. Martin Luther King, Jr. was assassinated on April 4, 1968 at 39 years old in Memphis, Tennessee. He was assassinated by James Earl Ray. MLK was survived by wife Coretta Scott King and four children. He was posthumously awarded a President Medal of Freedman and a Congressional Gold Medal. Martin Luther King, Jr. Day was established in 1971 and it became a U.S. federal holiday in 1986. Hundreds of streets around the United States have been named in his honor. The Martin Luther King Jr Memorial on the national mall was opened and dedicated in 2011. 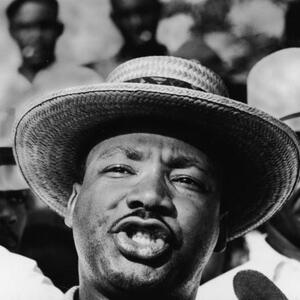