What is Mark Fuhrman's Net Worth?

Mark Fuhrman is an American former detective and current author who has a net worth of $3 million. Mark Fuhrman became well-known for the part he played in the investigation of the murders of Nicole Brown Simpson and Ron Goldman in the O.J. Simpson murder case.

Fuhrman became a detective in 1989 and was a police offer for 20 years during which time he earned over 55 commendations before retiring in 1995. He is best known for his involvement in the investigation of the murders of Nicole Brown Simpson and Ronald Lyle Goldman in the O.J. Simpson murder case. During the murder investigation, Mark found two blood-stained gloves and entered Simpson's estate without a search warrant. He was alleged to have planted one bloody glove on the estate. During the trial he was questioned about his use of racist terms. Attorney General Dan Lungren filed perjury charges against Fuhrman and he accepted a no contest plea and was sentenced to three years' probation.

Fuhrman was born on February 5, 1952 in Eatonville, Washington. When he was seven years old, his parents divorced and then his mother briefly remarried.

When he was 18 years old, he enlisted in the United States Marine Corps. He trained as a machine gunner and military policeman, going on to serve during the Vietnam War on the USS New Orleans, an amphibious assault ship stationed offshore from Vietnam. After having attained the rank of sergeant, he was honorably discharged in 1975. After he left the military, he entered the Los Angeles Police Academy and graduated in 1975.

While a police officer, Fuhrman developed a reputation for making racist remarks. In 1981, he requested leave for workers' compensation and had to undergo a psychiatric interview in connection to the claim. During the interview, he expressed racist sentiments in connection to his time in the military and on the police force. He received workers' compensation and was on official leave until 1983. He tried to leave the police force permanently during this time, attempting to get approved for stress disability pension. He admitted to having tortured suspects, lied to officers and detectives, and mistreating other individuals in the official line of duty during psychiatric interviews. While it was recommended that he be removed from duty, the City of Los Angeles argued that Fuhrman was trying to con the department into giving him disability pay. He thus was forced to return to active duty as a police officer.

In 1985, Fuhrman responded to a domestic violence call between O.J. Simpson, famed retired NFL player, and his wife, Nicole Brown Simpson. This call would later be used as pertinent evidence in the O.J. Simpson trial. In 1989, Fuhrman was promoted to detective.

In 1994, Fuhrman and his superior, Ronald Philips, were the first detectives to arrive on the scene of the murder of Nicole Brown Simpson and Ron Goldman. They were found outside of Brown's Brentwood condominium. Around 14 other police officers had arrived on the scene before Fuhrman and Philips and reported seeing a single bloody left-hand glove on the scene.

Because Fuhrman was familiar with the relationship between Nicole and O.J. Simpson due to the domestic violence call from a few years prior, he decided to leave the crime scene in order to visit Simpson's Rockingham residence, along with three other detectives. While there, Fuhrman discovered a number of blood drops in and on the white Ford Bronco parked outside. He then climbed over the wall of the property in order to let the other detectives in. They entered the property without a search warrant though they later claimed it was due to exigent circumstances as they were allegedly operating under the assumption that Simpson himself may also be harmed. 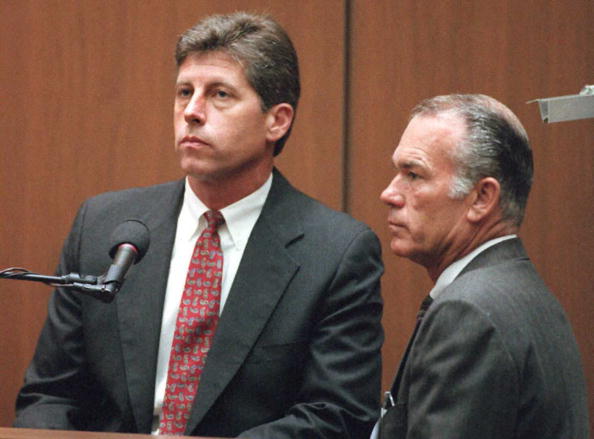 In investigating the Simpson property, they found Kato Kaelin in the guest house, who reported that he had heard thumping sounds earlier that night. Fuhrman also found a second bloodied glove, which was later determined to be the right-hand glove of the one found at the crime scene. The glove would become one of the most damning pieces of evidence against Simpson, as it was found to be soaked in the blood of both of the victims. Simpson was arrested and pleaded not guilty.

Fuhrman played a role in the trial, as Simpson's defense attorney used the reports of Fuhrman's earlier usage of racist language to build a case that Fuhrman actually planted the second glove at Simpson's house as an act of racial animus. Thought the psychiatric reports were ruled inadmissible, an article about them had already been published in an article in the New Yorker and may have influenced members of the jury. Fuhrman also took to the witness stand for the prosecution. While being cross-examined, the defense again tried to show that Fuhrman was racist and had a history of violence against African-Americans. Several witnesses testified and video evidence did show that Fuhrman had used racial epithets, which he had originally denied, and admitted to committing violence against African-Americans while a police officer. However, the jury was not granted full access to all of this evidence. Coverage of Fuhrman's part in the trial and the broader crime at points seemed to eclipse the murders themselves.

Simpson was found not guilty and only Fuhrman was convicted of any crime in connection to the O.J. Simpson case due to his perjury related to claiming to have not used racial epithets. In 1995, after 20 years of service, Fuhrman retired from the LAPD. Since then, Fuhrman has done interviews denying that he planted evidence or is racist. He has written a book about the case, "Murder in Brentwood," which was published in 1997.

Fuhrman has been married three times. He was married to Barbara Koop from 1973 until 1977, Janet Sosbee from 1977 to 1980, and Caroline Lody from sometime in the early 1980s until 2000. While married to Lody, the couple had two children together.