What is Marie Kondo's Net Worth?

Marie Kondo is a Japanese organizing consultant, author, public speaker and Netflix TV star. Marie Kondo has a net worth of $8 million.

Marie Kondo was born in Japan on October 9, 1984. Marie has been a tidying fanatic since she was a small child. She famously would stay behind during recess to tidy the bookshelves of her lower school classroom. She spent five years as an attendant maiden at a Shinto shrine and founded her tidying consulting company when she was 19 years old while a student at Tokyo Women's Christian University.

She first became known to western audiences thanks to her 2011 book "The Life-Changing Magic of Tidying Up: The Japanese Art of Decluttering and Organizing" which was published in more than 30 countries and sold 11 million copies. It was a bestseller in Japan and Europe and the United States (where it was published in 2014).

Today her movement, which is called the KonMari method, revolves around the concept of "sparking joy" with your everyday activities and possessions. For example, Marie teaches that one should only keep an article of clothing that "sparks joy" emotionally and instantly. She teaches people to gather their belongings category by category and only keeping the ones that are meaningful and joyful to the owner. She is a frequent media guest on shows like Good Morning America and The Today Show.

On January 1, 2019 her show "Tidying Up with Marie Kondo" debuted to rave reviews on Netflix. The eight-episode series brought Kondo to families around the United States to help them tidy up and de-clutter. Tidying Up reportedly was one of the most popular non-scripted shows on Netflix in 2019. As a result of the show's popularity, donations to charity stores increased significantly around the world. Donations to Goodwill shops in Washington D.C. alone saw donations increase nearly 70%. 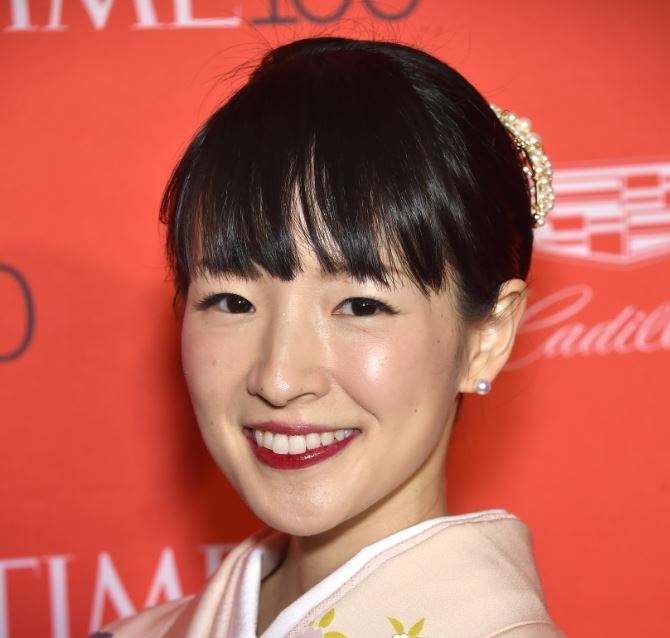 She is married to Takumi Kawahara and together they have two children. Marie and Takumi married in 2012. Today Takumi serves as CEO of their company KonMari Media, LLC.