Marianne Williamson net worth: Marianne Williamson is an American author, lecturer, and activist who has a net worth of $2 million. Marianne Williamson was born in Houston, Texas in July 1952. She has authored more than a dozen books including four New York Times number one best sellers in the category of "Advice, How To and Miscellaneous". Williamson founded the volunteer food delivery program Project Angel Food. She also co-founded the nonprofit organization Peace Alliance. Marianne Williamson ran as an independent in the 2014 election for California's 33rd congressional district in the United States House of Representatives. She announced her campaign for the Democratic nomination for the 2020 United States presidential election in 2019. Williamson has authored the books A Return to Love, Imagine What America Could Be in the 21st Century: Visions of a Better Future from Leading American Thinkers, Emma & Mommy Talk to God, Healing the Soul of America: Reclaiming Our Voices as Spiritual Citizens, A Woman's Worth, Enchanted Love: The Mystical Power of Intimate Relationships, Everyday Grace: Having Hope, Finding Forgiveness, And Making Miracles, Illuminate: A Return to Prayer, The Gift of Change, The Law of Divine Compensation: On Work, Money and Miracles, A Course in Weight Loss: 21 Spiritual Lessons for Surrendering Your Weight Forever, Tears to Triumph: The Spiritual Journey from Suffering to Enlightenment, and A Politics of Love: A Handbook for a New American Revolution.

Marianne Williamson Net Worth Details: When she ran for Congress in 2014, Marianne listed her net worth as ranging between $1 and $5 million. Her more recent financial disclosure pegs her net worth at between $700 thousand and $2.5 million. 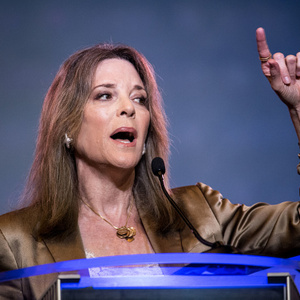